Dalton — If Sen. Elizabeth Warren gets elected president, maybe you’ll get Social Security after all.

First, a warning: Beware political ideology masquerading as economics I see it on both sides of the aisle with “think tanks” praising a policy that fits their political narrative by bastardizing the math. Full disclosure here: I’ve never voted for Sen. Warren and I doubt I ever will. As an Independent, I vote Democratic from time to time. I’m a huge fan of Deval Patrick, the former governor of Massachusetts. I did vote for McCain over Obama, but then personally spent six figures supporting Obama’s second election to beat Mitt Romney. I voted Independent in the last presidential election, mostly because I thought there was no way Hillary was going to need my extra vote and I wanted to encourage broadening our two-party system.

Aggregately, even though I may or may not have a bit of a professional crush on her, I’m just not a fan of Warren’s approach to funding her initiatives. But when it comes to the economics of Social Security reform, I like Warren’s plan. There is a lot to it, so just know that for the sake of brevity, I’m going to skip a lot of information. If you’d like to dig deeper into what she’s proposing, she lays out her plan here.

The presidential election is 14 months away, but Democratic primaries will start as early as five months from now (March 2020 for Massachusetts). It might be time for Democratic and Independent voters to consider who they want to back financially and, of course, vote for. Sen. Warren is, so far, winning the Social Security proposal game. It’s smart and good for the nation, so I can look beyond the fact that it’s a rather large negative for me personally.

Without changes, the Social Security Administration projects that its trust fund will be insolvent by 2035. Once insolvent, under current law, benefits would have to be reduced to equal the amount of money taken into the system. Under Sen. Warren’s plan, the Social Security trust fund remains solvent until 2054. There would be a bit of a projected clip to gross domestic product the first year, just 0.2. But over the long run, it is projected to be a small net positive for GDP.

Again, I’m going to skip a ton of stuff, but here are some of the major points:

Sen. Warren’s plan is a much more progressive Social Security system, with high-income earners and business owners taking the biggest hit while low- and middle-income people benefit much more than they currently do. The increased tax burden is going to hurt me personally, but I can’t deny it makes sense. The percentage increase of benefits to low- and middle-income households will be disproportionately larger than the increased tax bill of high earners. Higher earners will still have high incomes and will spend and invest a certain percentage of what they have. However, lower-income earners are much more likely to spend all their increased benefits, circulating that cash back into the economic system. Those increased benefits will lift an estimated 4.9 million people out of poverty, and the increase in benefits for the bottom half of the income spectrum is nearly 25%. I’m sure a lot of people will hate Sen. Warren’s plan on an ideological basis, and I get that. It’s theft. You can label it whatever you want, but it’s stealing from the rich to give to the poor. Instead of a gun, the weapon would be a law. However, looking at Warren’s plan on the basis of practicality rather than ideology, it just makes sense.

Speaking now as a very amateur campaign strategist, it only makes sense up to a point. I applaud Sen. Warren’s Social Security plan, but she has a lot of other policy plans (a total of 43 are listed on her website, including clean energy, childcare, student loans and housing) that also target high-income and high-net worth people. Combined, those policy plans may not be palatable to some on the moderate left who are also high earners and business owners. Aggregately the cost of those policies could spur donations to her Democratic primary competitors. If she should win the Democratic nomination, the cost of these policies may mobilize the Republican base against her in the general election. I give her high praise for her Social Security plan, and I hope support for it survives the dilution after tossing a bunch of other eat-the-rich initiatives on top of it.

For growth-oriented clients, I almost always invest in small cap stocks. Sometimes I don’t, for example, if I think the stock market is going to negatively react to a recession. Other times, like now (and depending on the client), I may hold 4-12%. At yet other times, like from 2003-07, I might jack up that allocation to nearly one-third in an aggressive portfolio. Currently my personal small cap stock exposure is 9.4%, but I’ve been lamenting that holding over the last year as large caps are pretty much at new highs, and small caps are still struggling to get back to their September 2018 highs. Being diversified means always having to say you’re sorry, because one investment will always be lagging another. The lagging performance of small cap stock makes sense because they tend to perform worse when there is stress or concerns for the markets, which has been the case given such things as trade wars and inverted yield curves.

I’ve been hoping to see some good news in small caps to give me some evidence that the overall stock market still has some steam in it before the next crash. Continued weakness in small caps is a sign of an aging bull market and a clue that odds of a bear market are increasing. And until recently, small caps were beginning to look as if they would play their traditional role in such a warning, as the relative strength lines (a measure of the price trend relative to another) for these stocks were in sustained downtrends relative to their mid- and large cap counterparts. Adding additional concern was that small cap breadth (the number of stocks going up relative to those going down) was failing to keep up with larger cap stocks.

The good news is that since the Aug. 23 low for the market, small caps have outpaced large caps, their relative strength lines have broken a downtrend, and their breadth has expanded. I’ll spare you the details because while these signs are encouraging, these improvements are thus far only short-term. We need to see improvements that last months, not just weeks. If that happens, we can be more comfortable holding stocks into 2020 (at mid-year I told readers it would be OK to hold stocks for the rest of the year; so far so good). But if there is re-emerging small cap relative weakness, we may have to consider what that’s telling us about the whole of the market.

I continue to favor large caps over small caps.

It seems like forever I’ve been saying at office meetings, “at some point foreign stocks are going to be a great buy!” But at the same time, it seems like forever that I’ve just been selling any foreign stocks that clients transferred over to us because they’ve pretty much all sucked. No promises, but I might be getting closer to buying some of these stocks. I don’t know yet if that’s a month or a year away, but it’s the first time in a long time I went from looking to sell everything foreign to looking at foreign stocks to buy. One of the reasons I got to that place of thinking is because, last week, the European Central Bank announced an economic stimulus package, lowering interest rates and restarting quantitative easing, or QE (i.e., buying bonds in the secondary market). This will support banks in the Eurozone, and if history repeats, the reintroduction of QE should give European stocks a positive bump. But like my small cap stock assessment, I need to see months, not weeks. With foreign stocks, and those in Europe in particular, I need to see what happens with Brexit (the withdrawal of the United Kingdom from the European Union) over the months to come. I may be looking for stocks to buy here in order to be prepared, but there’s a good chance that, depending on the Brexit outcome, I’ll just keep on selling these things if new clients keep on transferring them over to me to manage.

I continue to favor U.S. equities over foreign equities.

On Saturday, there was a coordinated drone attack on Saudi Arabia’s oil industry, which will force the kingdom to cut its oil output roughly in half. The price of a barrel of oil spiked more than any other day in history, opening up about 10% on Monday morning. On Sunday, Brent crude futures and U.S. West Intermediate oil futures rose as much as 19.5% and 15.5%, respectively, but came off those highs when President Trump said he would authorize the release of oil from the Strategic Petroleum Reserve to manage supply.

It is alleged that the attack came from Iran, and President Trump tweeted that we are “locked and loaded” for military retaliation once Saudi Arabia confirmed. 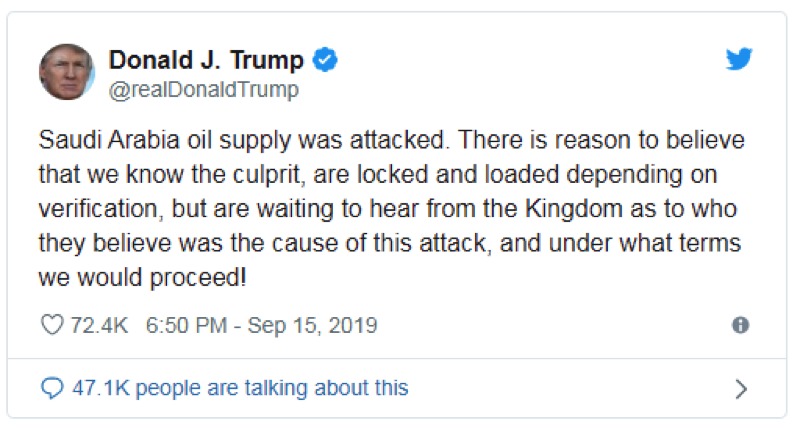 The coverage of this incident was through over the weekend and into Monday. I’ll keep you up to date on the economic and market ramifications as they develop. For now, if you short the oil market or oil-related stocks, I’d cover those shorts. And if you are long and heavily overweight oil or oil-related stocks, say 15% of your overall portfolio, I’d take some of those surprise profits and cut that allocation in half.

This article originally appeared in The Berkshire Edge on September 19, 2019.

The saga of rising interest rates in the long end of the U.S. Treasury market continued this week. Investors, fearing runaway inflation, sold both bonds and stocks. Will the selling continue, or is this a buying opportunity? It...
On March 11, 2020, the World Health Organization (WHO) declared COVID-19 a pandemic, and the economy rapidly changed for the worse. The impact on Berkshire County was larger than that of the nation. According to Moody’s, the Gross Metro...
As a 24-year-old woman, when I tell people I’m a financial advisor, I sometimes get some squints and questioning looks. Or even a face that suggests “aw, how sweet.” Little do these people know, females are a massive...