The stock market has climbed 10% in the last three weeks from its February lows. That is a substantial gain, over a year’s worth of historical performance for the S&P 500 index. And as such, it’s time for a break. 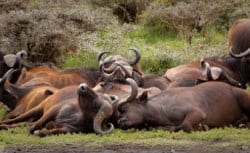 That doesn’t mean a sell-off will happen, but it never hurts to prepare one’s mind set for a bout of profit-taking. The worst that can happen is that I’m wrong. If it doesn’t occur, you can remain relieved (and possibly pleasantly surprised) that your portfolio is recovering the losses it incurred over the first two months of the year.

About the only investors that would be disgruntled by this turn of events, would be those who disregarded my advice and sold in a panic last month. For those in that category, I’m sure you are praying that markets do correct, so that you can get back in.

You may have noticed that while I expect a pullback, I’m not advising you to sell. That’s because I don’t see anything more than a small decline from, say, the 2,000 level to 1,940 or so on the S&P 500 Index. That’s pocket change.

The reason I am hoping for a pause here is that, in the short-term, the markets are overbought and extended. They need to consolidate in order to climb higher. Tentatively, the next upside target on the S&P is between 2,050 and 2,100; if we do achieve that, than we may actually see the markets turn positive by the end of this month. Wouldn’t that be something?

Of course, the rebound in oil has much to do with the gains in the market. The two are still bound together at the hip. My expectations that the agreement between the Saudis and Russians to freeze production would at least put a floor under oil proved accurate. It has also triggered a “short-squeeze” among global traders. A short squeeze occurs when short sellers, in this case those who correctly predicted and profited from the oil price decline over the last year by selling oil short, cover their positions and in the process bid up the price of this commodity.

The recent economic data is also contributing to the more positive mood on Wall Street. This week’s non-farm payroll number saw a jump in employment to 242,000 jobs last month versus 190,000 expected. Economic statistics across the board appear to be improving, which has put a dent in the bear’s recession case. For those who follow my columns, that should come as no surprise. I do not see a recession and have discounted this concern repeatedly.

But it has been politics that has mesmerized the Street this week. We had a sizable rally on Monday, in anticipation of the Super Tuesday results. I mentioned last week that a clearer picture of who would be the front runners in both parties would reduce uncertainty and rally markets. Hillary Clinton appears to be the “anointed one” among Democrats, while the Republicans are pulling out all the stops to destroy Trump’s momentum.

The travesty of the latest GOP debate is not worth a comment. Thursday’s televised anti-Trump speech by Mitt Romney, the ghost of elections past, was just as pitiful. This obvious GOP/Wall Street effort to sink Trump’s potential presidential nomination could backfire badly. If primary voters perceive the establishment is ganging up on their hero there could be an even greater rush into Trump’s corner. It appears the Republican Party is dead-set on blowing itself up and giving the election to the Democrats. So be it.