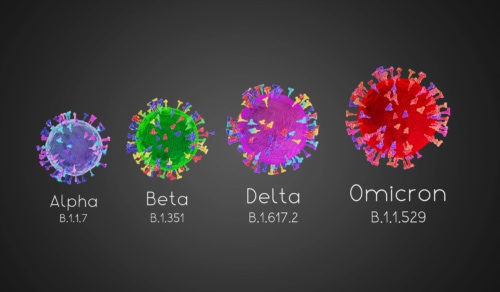 Most investors blame the discovery of a new, possibly more virulent mutation of the coronavirus for the decline in stocks this week. No doubt there is some truth to that, but equally as important was the change in monetary policy enunciated by Jerome Powell, the chairperson of the Federal Reserve Bank, this week.

Readers have seen the S&P 500 Index decline by about 4% since the Thanksgiving week. The announcement that a new COVID 19 variant, dubbed Omicron, had been discovered in Africa surprised the investment world. Friday, November 26, we saw a substantial 2% downdraft in the financial markets. The move was exaggerated by the absence of a sizable number of traders who had decided to take a long weekend.  Since then, markets have been whipsawed daily based on the latest Omicron headlines.

Unfortunately, it will take several weeks before scientists and the medical community can determine the severity of this new threat and if the present regimen of vaccinations is effective against this new mutation.   In the meantime, every strategist, pundit and taxicab driver will throw their two cents into the virus mix, creating even more confusion.

Of course, the direct outcome would be that the present vaccines are not effective against Omicron. Global economies would need to shut down once again, and new vaccinations, which would take months to create, would be required to stop the spread of sickness and death.

On the positive side, some believe that while Omicron is more contagious, it is not as lethal. In which case, the rapid spread of the mutation would first infect and then inoculate the unvaccinated worldwide, thus creating a sort of herd immunity. I think that somewhere in between lies the truth.

While Omicron has become a negative factor, it was not the only change in the financial picture. On Tuesday, November 30, during testimony before the U.S. Senate Banking Committee, Jerome Powell, Chairperson of the Federal Reserve Bank, did what appeared to be an about face on monetary policy. Until now, the Fed’s chief goal was to reduce unemployment at the expense of a higher inflation rate. Powell appeared to take on a new mantle, that of the nation’s chief inflation fighter, casting aside his former dovish stance towards continued easing of monetary stimulus.

Readers should refer to this week’s “The Retired Investor” Thursday column for the reasons why. While investors and consumers will likely be relieved that the Fed’s focus is switching to fighting inflation, the policy shift presents some clear and present dangers.  The main weapon in the Fed’s arsenal in reducing inflation is less monetary stimulus. Powell has already said that the FOMC, in their December 2021 meeting, will be discussing moving up their timetable for reductions in asset purchases.

The obvious next move would be to move forward with their plans to raise interest rates. Higher interest rates, after over a decade of rate declines, might create more than a few hiccups in a stock market close to record highs. I suspect that much of the downside this last week in equities was as much about the Fed’s plans as it was about Omicron.

So where does that leave the markets this month? I suspect we will see more of the same kind of volatile action in the weeks ahead. I am tempted to say that we have already put in the highs of the year, but I don’t want to sound like the Grinch Who Stole Christmas quite yet. We could still see a Santa Claus rally, but we face some formidable barriers to more upside.

We have the debt ceiling deadline on December 13, 2021, followed a day later by the two-day FOMC meeting. We could see an impasse on the debt ceiling, as well as a decision by the Fed to further reduce their asset purchase program. And Omicron could turn out to be worse than anyone expects.

What troubles me about today’s market is the elevated level of the VIX, the risk index. It is at the highest level since the COVID-19 crisis of March 2020. Anything above 20 on the VIX indicates a high probability of large swings in prices for stocks and indexes. If I look at price behavior on the S&P 500 Index, I suspect we are in a wide 200-point range of volatility with as much downside risk as 100 points to 4,450, potentially 100 points higher to 4,650. If we drop below this range, prepare for a bad Christmas. On the plus side, I would give the markets an all clear above 4,650.

To Our Family of Clients, Last year felt like it would never end. It wasn’t as bad as 2020, but we still felt the weight of the COVID-19 pandemic. In contrast, 2022 felt like a blur. This was...
Your elderly dog has arthritis. His breathing is difficult. He needs assistance to get up, and his bladder is failing. The vet bills are far higher than your own, and it is getting more difficult to pay them....
Spam emails, texts, and calls – we all get them. The offerings are usually too good to be true: a free cruise, an inheritance from a long-lost aunt, a free iPhone. Who wouldn’t want to be the lucky...