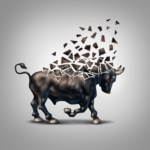 It always happens. Sometimes it takes longer than one would like, but sanity returns to the stock market when you least expect it.

Story stocks like Tesla were rising along with the technology-heavy NASDAQ index. Stay-at-home stocks were logging daily gains that in normal times would take years to achieve. But by Thursday, investors decided it was time to get off the merry-go-round. The problem with doing that is that everyone tries to exit through the same small door at the exact same time.

As you might imagine, technology stocks took the brunt of the sell-off. On Thursday, the NASDAQ fell 4.96%. The benchmark S&P 500 Index suffered along with it, falling more than 3.52% by the close. The Dow, considered to represent the industrial sector, also declined, but not nearly as much (2.78%).

Friday’s news that the economy added 1.371 million jobs, while the unemployment rate fell from more than 10% to 8.4%, helped stocks to recover some of their losses at first. That did not last long as the averages were hit yet again. For some readers, this week’s sharp decline may feel like the end of the world is coming; it is not. We have all just become too accustomed to day-after-day of rising markets. But markets go both ways. I am not too worried about this one. Instead, I believe this will usher in a new trading range for the market, and possibly a trend change in what works and what doesn’t.

There are too many uncertainties facing investors during the next two or three months. The presidential election is just one of them. We don’t know if we will be facing a new wave of the coronavirus triggered by back-to-school contact as well as the cold weather and flu season. As for a vaccine, we don’t know when, or if, one will be developed this fall and how fast it can be delivered to the population.

All of the above should cap the upside somewhat for stocks, at least until we get better clarity. Yet, continued support by the Fed should prevent markets from falling out of bed. I also expect to see market leadership change somewhat. As such, we might see a bifurcation among the market indexes. We could see a period where technology, as represented by the NASDAQ, continues to fall, while the Dow gains ground. The S&P, under that scenario, could remain choppy.

In that kind of market, less attention would likely be paid to the growth and FANG names, but more interest in investing in areas like financials, industrials, and maybe the energy sectors. Those three areas have underperformed the markets dramatically since March, as have value stocks altogether.

If you compare the Russell 1000 growth versus value indexes, growth stocks rose 33% this year through Wednesday, while the value stock index dropped 9%. That’s a 42 % difference–the largest in the history of the Russell 1,000 Index, dating back to 1978. Maybe it is time for investors to look at value?

As regular readers know, I have warned you of this impending correction over the last two weeks. I wasn’t sure of the day, or week, but too many conditions were flashing yellow, or even red, indicating an impending decline. Now that we have it, take a deep breath and realize that this is part of stock investing.

I don’t expect too much more damage on this selling spate. I figure 100 points downside on the S&P 500 Index to somewhere around 3,300, or a little lower if things get out of hand. As it stands, we already have had a 6.6% pullback in two days! If so, that would be about an 8% decline, at least for the benchmark average. NASDAQ, which is down almost 10% in two days, could see a much greater hit, largely because it has gained so much more than the other averages since March.