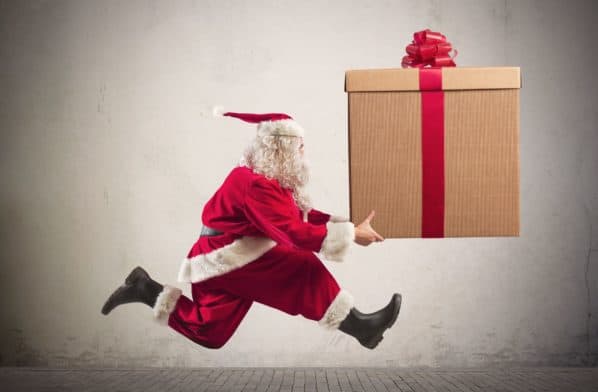 Officially, the Santa Claus rally has not even begun. And yet, almost every day over the last two weeks stocks have climbed higher. Unlike last year, there appears to be nothing stopping the market from continuing to make new highs at least into January.

Historically, the Santa rally begins on the day after Christmas and stretches through to the second day of January. The fact that last year he failed to make an appearance might mean that the jolly old elf could be making up for lost time by coming in early.

The markets action is especially impressive since this is the time of the year when investors usually sell their losers in order to establish a tax loss for the year. Large institutional investors and mutual funds do the same thing. But that selling pressure has been met with buyers, which is supporting the market.

There are two recent trends that are keeping things bullish. The first is the Phase One trade deal breakthrough. Despite its lack of substance, it does reduce some of the uncertainty in the markets even though the final deal has yet to be signed.

The second, and more important development, is the Federal Reserve Bank’s injection of over $425 billion into what is called the “repo market.” It is the market that provides critical short-term funding for banks in need of cash to settle certain end of year obligations in their day-to-day business. The Fed actually provides cash to financial institutions in exchange for some of their U.S. Treasury bond holdings.

Although the Fed won’t say it, what they are doing is a form of quantitative easing or “QE” that reduces the cost of borrowing money as effectively as if they cut interest rates. In the past, the Fed has used QE in order to stimulate the economy. And every time the Fed eases monetary policy, the stock market responds positively.

On Monday alone, the New York Fed increased the amount of their bond buying by $86 billion. We could see a like amount on December 30th through January 1, 2020, according to Fed watchers. When all is said and done, the month of December central bank monetary stimulus could total $500 million. That is not chump change.

And before we forget, there is also the “January effect” just around the corner. Historically, January is the best performing month of the year. That’s when folks Wall Street usually receives their bonuses, and a lot of that money goes right into the stock market. In addition to the bonus play, a lot of those stocks I mentioned that are sold about now for tax losses are repurchased in January, especially in the small cap arena.

The likely results of all these beneficial trends this month and next should provide pretty good support for stocks.  I would like to see a bit of a pullback in stocks (30-50 points on the S&P 500 Index) between now and Christmas, however, just to relieve some of the overbought conditions. That could set us up for a sprint to the upside in the markets after Christmas through the end of the year.

There are some investors who raised cash a few weeks ago, betting that Trump would not sign a trade deal, more tariffs would be introduced on December 15th and the markets would plunge. That was the wrong move. Now, they are waiting for a pullback to get back in.

Of course, markets usually do what is most inconvenient for the greatest number of investors, so we could conceivably just grind higher and higher forcing those on the sidelines to capitulate and buy back in.

You don’t have that problem, readers, because you have been following my advice and remaining fully invested. That had paid off nicely. In my next column, I plan to throw the bones, (as I do every year), and see how 2020 will shapes up, so don’t miss it.

In the meantime, have a Merry Christmas, Happy Hanukkah and for those who can, spend it with your families and loved ones.