Now that the Fiscal Cliff is behind us and the spending battle is dead ahead, investors are wondering what lies ahead.  Historically, the market’s performance in January has been important. Since it is a good signpost for the future over the last 60 years, let’s examine some of the indicators that many professional traders use. 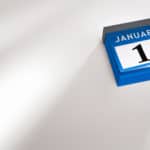 Conversely, when the first five days are negative the markets were down for the year, but only 47.8% of the time. The indicator therefore, does not work as well on down periods. Readers should be aware that, in general, during post-election years the markets have not done well. Only 6 out of the last 15 post-election years saw gains in the first five days of the year. It looks like 2013 will be an exception.

Building on the first five days theory “where the S&P 500 goes in January, so goes the year” is the most widely used barometer traders follow and with good reason. Over the last 62 years (since 1950) this indicator has been accurate 88.7% of the time.  Down Januarys invariably ushered in a new or extended bear market, a flat market or at least a 10% correction.  The average loss for those years was 13.9%.

I guess the only good thing to be said for those down years is that they were great buying opportunities since invariably the year after saw significant gains.

There is also something called the “January Barometer Portfolio,” which is made up of the S&P’s three best performing sectors in January. If you invested in them and held them through the February of the following year, you would beat the S&P Index on average by 1.4%. Finally, Januarys have been the best month of the year for NASDAQ performance consistently since 1971.

So here it is January 4th, the last day of the market week and stocks are up. So far, if the indicators hold, 2013 promises to be an up year for investors.  I agree with that assessment. But that doesn’t mean that everything will go straight up.

Now that the Fiscal Cliff is behind us, we face a long litany of worries. The battle over spending cuts has begun. We will see the debt ceiling reached very soon. The government will run out of money (again) by the end of February. Without a deal on spending, the drastic cuts in defense and entitlements trigger on March 1. That would hurt the economy. And in the wings, the credit agencies are waiting to downgrade our government debt once again unless a real effort is made to address the deficit.

Make no mistake, my readers, we will continue to be thrown between hope and despair by those fools in Washington. But markets normally climb walls of worry. My advice is to ignore the noise in Washington. Keep your eye on what is important— the growth in the economy. Those of you who followed my advice in November stayed invested, expected a last minute deal of the Cliff and were rewarded for your patience and perseverance.

I am waiting like everyone else to see what the rest of January brings. Until then, I will ride the ups and downs while continuing to buy any dip especially in emerging markets, (including China), emerging Europe and Europe overall. Hang tough and see it through until I say otherwise.