For traders, the old adage to “Sell in May” is now upon us. Over the past 40-plus years this recommendation has worked over 70% of the time. Should you go with the statistics or ignore them? 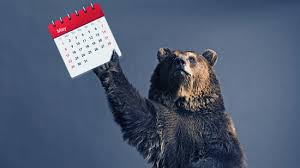 As regular readers know, the S&P 500 Index has already reached my target of 2,100. We did so over two weeks ago and until yesterday the bulls have been trying to break over that line and get back to the historical highs around 2,134.

The perfect excuse to do so should have occurred on Wednesday when the central bank’s Federal Open Market Committee announced their latest decision to keep rates where they are. The wording of the news release was almost identical to last month’s statement. Rather than roar, (as stocks usually do after dovish words like that) the markets, instead, could barely eke out a gain for the day.

Notice too, that despite an almost 17% increase in the price of oil thus far in April, stocks have done nothing. What, you may ask, has happened to the stock/oil price correlation that has been with us since the beginning of the year?

Then there is the dollar, specifically dollar weakness, which has dropped below 94 on the U.S. Dollar Index. That has been a line in the sand support for the greenback against a basket of foreign currencies all year. One would think that would be good for the economy—cheaper exports, better corporate earnings—but the markets are a fickle lot. They decided this week a weaker dollar might reflect a weaker economy. The slide in the dollar really accelerated this week when the Bank of Japan disappointed investors by failing to provide even more stimulus to their economy.

Of course none of this seems to faze the commodity speculators who blithely bid up the price of precious metals, agricultural products, base metals, energy and the kitchen sink. What, you might ask, is driving commodity prices higher? One word—China. That’s right, now that the Chinese government has made it more difficult for the multitude to speculate in their stock markets, they have turned their attention to the commodity markets.

At its peak, as an example, iron ore prices have risen 73% and rebar 62% in Shanghai since the beginning of the year. Inveterate gamblers, both retail and professional, are now doing the same thing to global commodity prices that they did in their stock market last year. China’s securities regulators started cracking down on the country’s commodities futures exchanges this week to prevent further speculation.

I warned readers in my column last week not to chase commodities. I repeat that warning now. Recall what happened to the Chinese stock market when regulators curbed speculation last year? Stocks fell 40% and took global markets down with them. Could that happen again in the commodities markets? Is the Pope Catholic?

I could go on and mention how corporate earnings this quarter are really turning out as bad as people feared, although there have been some notable exceptions. Then there is the devastation that is occurring on the NASDAQ. Could that index be foretelling a pullback in the overall market?

The answer is yes but don’t worry, it is not Armageddon. It is simply a much-needed correction in a stock market that has gained 13% in less than two months. Remember how I warned readers to examine their risk tolerance a few weeks back? Well, welcome to the new stock market, which is just chock-full of volatility and will remain so for the foreseeable future.

I think we will see an up and down market throughout the summer. Remember that we still have the presidential conventions to contend with in June and July. Don’t get me started on that subject! But I digress.

This pullback could see the S&P 500 fall to 2,040 or so, as a first stop. Of course, since it is hard to make short-term predictions like this, it could fall even further to the 200 day moving average. That would put us back to 2,014 on the index. If so, that would be a healthy sign in a market that has been overbought for weeks.