Dalton — Despite a pandemic that has so far cost the U.S. 26 million jobs, the S&P 500 is down only about 15% from its all-time high, after jumping 29% from its March 23 low. It doesn’t make sense. Well, if the economy does turn around quickly, then I supposed I could rationalize it a little. But come on! The stock market has slowed to a point where oil was trading to an incredibly low $10 per barrel last week, and then at a negative $36.11 just hours later (based on the May futures contract for West Intermediate crude).

When the economy slows, and there is less oil usage, oil drillers will typically keep drilling because oil wells are notoriously less productive once you shut them off and turn them back on. However, oil prices will typically reach an equilibrium as they fall and users consume more. To get to a negative price tells you just how bad things are right now. Obviously oil drillers can’t just dump the stuff, because it’s toxic and highly regulated. Instead they store the excess supply in tankers until prices recover. However, storage is almost full. The economy has come to such a standstill that oil isn’t being used, and the oil drillers literally couldn’t give it away at zero dollars. There has been a lot of attempted mitigating chatter about how much it didn’t really matter because it was just one futures contract and technical factors and blah, blah. But when the economy is so stalled-out that your option is to pay someone to take oil off your hands, that’s a problem, as it illustrates the destruction of demand in the economy.

Oh, and last month, the three-month Treasury bill went negative. That wasn’t even something we considered to be possible back when I was a kid in business school. I mean, why would it be? It doesn’t make sense.

Yet the stock market is doing fairly well. I mean, I’m glad it is. However, it confuses me. Millions of Americans are skipping credit-card payments as they’ve been put out of work. That’s probably not surprising to you. Credit-card loans are often the first loans that people stop paying when things get bad. But businesses are sucking wind, too.

Well, not all businesses: Some firms are selling due to sheltering-in-place comforts or protective necessities. But most are under severe financial pressure, contending with weaker demand or an all-out shutdown. While some states opened for business in some fashion last week, there are yet to be any indicators of life returning to normal. Admittedly it’s too early for any real data collection on the states that just opened. It’s not too late, however, to know that, in March, the amount of businesses being late in payments to other businesses was up 7 percentage points year-over-year. Also, those payments are five days later. I have a sense the April year-over-year numbers will make those comparisons look tame. And that will show up in gross domestic product.

The consensus for GDP this quarter is that it will be awful (I’ve seen estimates of a contraction of gross domestic product of 10%, 25%, even 40%). The reality is, of course, that we’ve got no idea how the economy will perform in the short term because we don’t know how the virus will perform. Also, the expectation for GDP for the entirety of 2020 is that it will be its worst calendar year contraction since World War II.

By the end of 2020, the consensus is that the U.S. economy should not only start to rebound, but, as President Trump put it, will take off like a “rocket ship.” I have my doubts, but we’ll begin to get a better handle on that over the weeks to come. Again, we don’t know if that’s remotely accurate because we don’t know when, or how, all the states of the union will get back to work. As some states such as Florida and Georgia open their businesses’ doors, we’ll gather anecdotal evidence as to whether consumers want to go back to restaurants or shop in brick-and-mortar stores. I suspect that lingering concerns about the virus, especially for and by the most vulnerable, will have people continuing to exercise social distancing even after the official lockdowns lift, which has been the case in China. Also, we’ll see if all-but-dead businesses rehire and better-performing ones reinvest in themselves. I have my doubts. I foresee a lot of permanent business closures and lost jobs.

Maybe the consensus and I will split the difference: Maybe the economy could rocket back from the depths, but instead of blasting the moon, it just sorts of lingers in orbit — or if not in orbit, in quicksand. I suspect there will be a two- to four-month economic bounce, after which it’ll feel stuck until there is widespread global adoption of a vaccine. I don’t doubt a recovery. Heck, I think we are at or near the economic bottom. Everything that could be closed was closed. Now we’ll see businesses open back up in some fashion. Barring a resurgence of COVID-19 outbreaks, which can’t be ruled out, things are only going to get better from here.

Even if the economy rockets back, again, it doesn’t make sense that the stock market is only about 15% off its high. After the 2002 Technology Bubble crash, it took seven years to get back to its previous highs. After the Financial Crisis crash, it took 5 and a half years to get back to its previous highs. It just doesn’t make sense to me that we can force the economy into a near depression and expect the stock market to get back to its previous highs in just a few months. I am concerned that stock prices are less attached to the intelligent expectations of an economic recovery and more so a function of investors who are used to buying any dip in fear of missing out on a rally. Don’t get me wrong: The buying has been impressive, and it’s a good sign. But the recovery rally has been so impressive that it doesn’t seem realistically grounded to the expectation that the economy will get back to where it was. I suppose that the rally can partially be explained by the speed and size of the stimulus program propping up what I’ve referred to as “zombie companies” — not exactly dead, but certainly not a version of their former selves, kept alive by feeding on government support. Even if the market doesn’t make lower lows in any retest, it’s hard for me to imagine that a new bull market is going to be fueled by zombies.

According to the American Association of Individual Investors, not a lot of people feel bullish, and a good number are feeling bearish. Historically, that’s been a positive for stock prices. In the most recent AAII survey, only 24.86% of investors responded as bullish, which was a sizable down from the week prior and is the lowest level of bullishness since the COVID-19 outbreak began. Bearish sentiment shifted higher — to 50%. With the bull-bear spread a -25.14, it’s at its widest level since late August 2019, before the stock market melting-up.

I can see a lot of reasons why it doesn’t make sense for the stock market to be at its current levels. But I’m not going to fight it. The economy is opening back up and I could be pleasantly surprised about how realistic the stock market is regarding the smoothness of the transition from a sudden stop to a functional economy. The stock market typically does best when it’s climbing a wall of worry. And as a contrarian, it’s hard for me to not get more constructive on the market when everyone else is so freaked out. It’s a rare occurrence when bearishness reaches 50.0% and at the same tie the bear-to-bull ratio was at least 2 to 1. 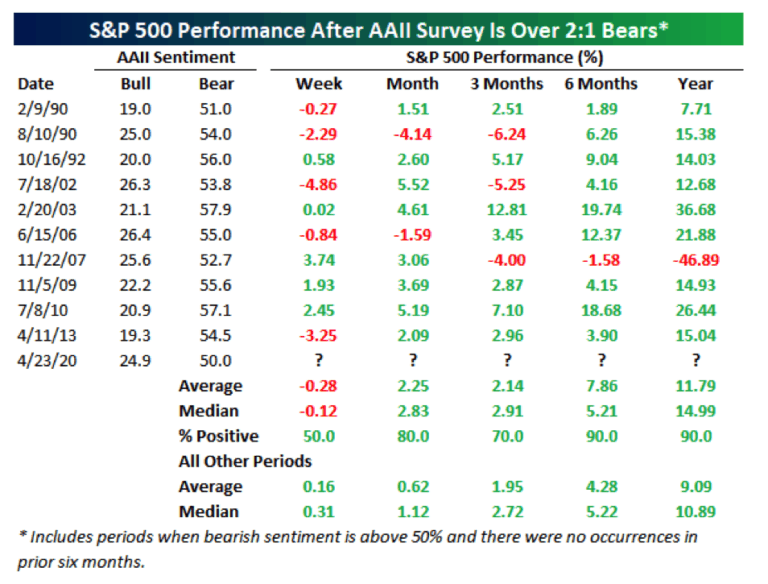 In the months and years after that has happened, on average, the stock market outperforms. I am balancing my need for risk management with some interest in return. I have a lot of exposure to the U.S. stock market, but I’m using options to hedge those bets. Hedging is important. I am confident there will be a significant bounce from the current economic low as businesses restart: The third quarter’s GDP could experience massive growth. However, I fear a resurgence of outbreaks will occur in the U.S. Asian nations are a couple months ahead of the U.S. in dealing with the virus, and they have not had that problem. But they’ve got better testing, a uniform strategy to deal with new outbreaks, and better control on their citizens’ behavior. With so many risks out there, why aren’t you hedging your investments? It doesn’t make sense.

This article originally appeared in The Berkshire Edge on April 29, 2020