As Wall Street climbed higher and higher over the last five years, Main Street has languished. Jobs, until recently, were few and far between. But if the latest economic statistics can be believed, things just might be looking up. 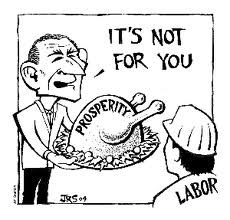 The number of Americans filing new claims for unemployment benefits fell again last week. The four-week average of claims, which is considered a more accurate measure of labor trends, has also fallen. Despite a rough winter in the Northeast, the recent shut-down of West Coast ports, the strong dollar and weaker global demand, employment gains appear to be accelerating.

The nation added 295,000 jobs last month, making it the 12th straight month that employment gains have been above 200,000/month. That is the longest string of gains at that level since 1994. Officially, the unemployment rate has fallen to a 6 ½ year low of 5.5%. The Federal Reserve Bank expects it to drop even lower toward 5%.

Although the employment data is heartening, economists, the Federal Reserve and this writer are far more concerned about wage growth and with good reason. American laborers in general haven’t seen a pay rise since before 2007. Wage growth during this recovery has been underwhelming. In December, wages grew by only 1.9%. January’s gain was a little better, but still anemic by historical standards.

Most economists expect that for 2015 wage growth will only average 2.5% gain. That is still below the 3-4% rate of wage growth gains per year that has been the norm in previous economic expansions. And without those gains, any further economic recovery in this country will simply mean that most Americans are just getting by as opposed to prospering.

There are all sorts of explanations for why this is occurring. Some argue that the job growth we have experienced in this country has been largely confined to service jobs that pay no more than a minimum wage. Skilled manufacturing jobs are either not available, or are not being filled because of a mismatch in the skills available in the labor market.

The retirement of scores of Baby Boomers may also be contributing to downward pressure on wages. As the oldsters retire, their jobs are being filled by younger workers at significantly lower compensation. That tends to cancel out on the margin any wage growth registered by younger workers.

The question confronting all of us is how low does the unemployment rate needs to go before the American worker’s demand for higher wages is satisfied? Anecdotal evidence seems to indicate that this may be happening, at least among some larger employers. Aetna recently raised their minimum hourly wage to $15/hour for 5,400 staff. Walmart raised their minimum wage by $1 to $10/ hour while the Gap raised its wage to $9/hour this year and $10/hour for next year.

Unfortunately, that is a drop in the bucket. At this rate, American laborers have a long way to go before they can even catch up to the inflation-adjusted income that their parents earned. One can only hope that as the unemployment rate drops toward 5%, we may see some more meaningful wage gains in the future.