The funny thing about declining stock markets is that when they last more than a couple of weeks, talk of recession starts to percolate among investors. It is no different this time. 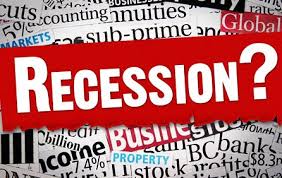 I have written before that the stock market has erroneously called the last 13 of 7 recessions, meaning that weak stock prices do not necessarily herald a weak economy. There have been instances in the past where a prolonged decline over a year or so has contributed to a recession but even then the data is not conclusive.

There is no evidence thus far that the U.S. economy is rolling over. Economic data continues to be spotty, which is consistent with a moderately growing economy. Unfortunately, how that data is interpreted depends on the mood of the investors. When sentiment is extremely bearish (as it is now), every disappointing data point becomes fuel for those predicting a recession.

When markets are up, investors take a “cup half-full” approach and focus instead on the positive statistics. There is no question that our present growth rate (when compared to past recoveries) is below par, running at a moderate 2.25 % rate. Historically, we should have expected a year or two of 3.50-4.00% growth by this time–five-plus years into this recovery cycle. But those expectations have not been met.

There are several explanations for why this economy has had such a mediocre recovery. Some argue (including the Federal Reserve Bank) that although the Fed did all in its power to stave off Depression and grow the economy, without help from the government in the form of fiscal stimulus, they were fighting with one hand behind their back. History and noted economist Paul Krugman would agree with that explanation; also recall that for at least the last six years, congress has been cutting spending, not increasing it.

Then there is the demographic argument, which says that the Baby Boomers are retiring and therefore both productivity and economic growth are slowing as a result. In exchange, younger workers, who are less skilled and some say less productive are not qualified to fill these vacant, high-paying skilled jobs. As a result, there are more minimum wage workers earning far less than their parents. These new workers, so the theory goes, simply do not have the wallet-power to propel the economy to a higher growth rate. Since consumer spending is such a large part of our economy (over 70%), they have a point.

There is also the argument that 2008-2009 was no ordinary recession but rather a credit recession similar to the Great Depression of the 1930s. As such, the economy requires a much longer period to get back its mojo. Recall that the Depression required ten years and WWII to recover fully.

Others argue that the end of monetary stimulus and the Fed’s actions to tighten interest rates will cause a moderate economy to weaken and ultimately fall into recession. They point to the previous quantitative easing efforts that worked only until the Fed discontinued their use. Each time the economy weakened (as did the stock market), and this time won’t be any different. Time will tell if they are correct, but so far the evidence does not bear out their concerns.

There are several other arguments, including a hard landing in China that will drag the rest of the world’s economies with it, but none of this appears to be showing up in the data. Instead, we are roughly at full employment with further job gains expected. The world economy continues to grow, again moderately, but growing nonetheless, as is the United States economy.

What might change my mind is the one variable that has signaled a recession 100% of the time–an inverted yield curve in interest rates. Normally, interest rates are higher the further out you get in the bond world. A thirty-year bond has more risk (and therefore a higher reward in terms of interest rate) than a ten, five or one year security. Recessions have always been pre-announced when short term interest rates climb higher than long-term rates. There is no evidence of that. And until we see it (if we do), I would advise you to ignore all this noise about a possible recession.

There is not much good one can say about the coronavirus, but if one looks hard enough there are a few silver linings. One of which is the revival of the drive-in theatre. Cinemas have been closed for...
Credit the Fed for this week’s bump up in the averages. Technology shares led the charge as usual, shrugging off a sinking economy, higher unemployment, and no progress on another bail out. What else is new? At the...
Dalton — Investing in stocks just got more attractive because of a policy shift announced by the Federal Reserve’s Federal Open Market Committee on Aug. 27. Details are found in the Federal Reserve’s statement of longer-run goals and monetary strategy....