It’s official, on Wednesday afternoon the Federal Reserve bank hiked the short-term interest rate, called the Fed Funds rate, for the first time in 9 ½ years. It is the beginning of a new financial era for all of us and it behooves you to understand its implications. 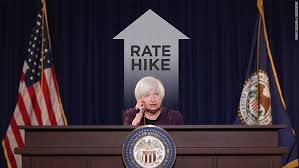 Let me first assuage any concerns you may have that this single 0.25 percentage point increase will impact your life anytime soon. Instead, simply view this event as the beginning of a progression to gradually higher interest rates that will ultimately impact everything from car loans to retirement savings accounts.

The mechanism by which the Fed raises rates is complicated. Just know that overtime there is a domino effect to raising rates. As the Fed hikes on the short-end of the yield curve, interest rates on bonds of all sorts will gradually readjust with longer dated securities ( like a 30-year bond) rising more than shorter duration securities (say, a ten year note). But this takes time and exactly how much time depends on the growth of the economy, the expectations for inflation and a hold whole of other variables such as interest rates overseas.

While some economists hope that the Fed’s decision is a “one and done” event, most financial experts are already expecting at least three more rate hikes in 2016. If so, you should start to feel the impact of rising rates by the latter part of next year. For example, only an hour after the Fed raised rates, several money center banks hiked their prime rate to 3.5% from 3.25%. As such, you should begin to monitor the inflation rate, credit card loan rates, mortgage rates (especially on existing adjustable rate mortgages), CDs and money market rates. All of the above have been so low for so long that they are no longer on most investors’ radar screen.

The facts are that as time goes by, borrowing money is going to cost you more. One of the ways you have benefited from low rates is in car loans. The auto industry has had a tremendous windfall in sales over the past few years. Light vehicle sales have almost doubled since the lows of the financial crisis. This was largely due to the automaker’s ability to offer you financing on their products at record low rates.

For those in retirement, rising rates can be a mixed bag. For almost a decade, retirees have had to contend with lower levels of income because historically low rates of interest mean low rates of return on bond investments. Over the next few years that will change. New buyers of bonds will receive higher returns on their money as rates rise.

However, for those who have insisted on holding a large percentage of their retirement savings in bonds, expect to see lower rates of return as rates rise. And by the way, this also applies to investors who are retiring soon and have money in target-date retirement funds in their 401(k) and 403(b) tax-deferred savings plans.

There are some who worry that even this small increase in the Fed Funds rate will have a dampening effect on consumer sentiment. Clearly, for those of us who have experienced periods of rising rates in the past, our knee-jerk reaction is higher rates equates to slowing economic growth, which leads to less spending. Again, I need to caution you that a moderate rise in interest rates can and has happened in conjunction with a growing economy and accelerated consumer spending. It is all dependent on how well the Fed engineers this process.

For the past several years, I have placed my faith in the Fed, first to rescue us from the financial crisis, then to engineer a recovery despite no help from those in Washington. I trusted them to engineer a plan to normalize interest rates and so far I have not been disappointed. I will continue to back the Fed in this latest move and you should as well.

Dalton — According to the Spectrem Group and the May edition of its monthly survey of more than 800 investors, most people do not believe that the economy should be reopening. Too, while some are optimistic about the future...
Dalton, Mass. – The events of the last few weeks have brought directly to the forefront the longstanding inequality and injustice that plagues our communities, our cities, our schools, and yes, even our homes. We cannot be silent....
Whether you’re planning for retirement or selling your business, this Dalton firm is ready to optimize the experience so you get the most out of your assets, and your life DALTON — Allen Harris wants you to picture...