Forty-two years ago, when the cell phone was first invented, the new device was hailed as a major tool in boosting everyone’s productivity. Today, we are discovering that the opposite is true. The cell phone has become a major distraction. 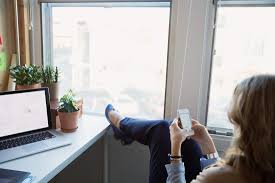 Ever notice how many people on the job are making cell phone calls? Cops, clerks, nurses, brokers–;it doesn’t matter who they are,—their dependence on their cell phone is almost an addiction. New research reveals that you don’t even have to answer your phone to reduce your productivity.

A study by the Journal of Experimental Psychology discovered that subjects who needed intense focus in their daily routines performed poorly when they simply received notification of a text or call on their phone. Their productivity dropped dramatically even if they chose to ignore the notification. Researchers call it the “degree of distraction.”

Recently, I tested this concept on myself. My friends and relations will attest to my lack of interest in all things cellular. I regularly forget my phone. Many times my wife will call me on my cell, only to hear it ring on the kitchen counter next to her.

But I have grudgingly been attempting to join the 21st Century in my electronic life. As such, I have a brand-new smart phone, a watch that tells me I have a call (as well as my heart rate) and an tablet at home. Over the last week, I’ve made sure my cell phone was on my desk, fully charged and “on” in my own experiment. I wanted to test my own level of distraction.

Money management requires a fair bit of focus; writing columns even more. Usually, I am under a deadline when I write. Producing readable copy regularly requires an enormous amount of concentration on my part. I try not to be disturbed during this process because it does throw off my focus.

This morning my cell phone was on and I received three calls and several text messages that I did not answer. Nonetheless, it took me an extra hour to complete this column. The same thing happened earlier in the week while writing another column. For me, simply the knowledge of receiving a message triggered a distracting stream of questions–who was calling me and why, was the message important, was it an emergency? Suffice it to say that I did check and see who had called just to put my mind at ease.

Granted, it was a most unscientific experiment, but it does support a growing volume of research on the subject. Although in this day and age multi-tasking is a daily chore, the facts are that human beings are really not that good at it. Workers think that they can text or access social media sites such as Facebook, Twitter or Snapchat and still maintain productivity. The facts are that the average office worker wastes over one-third of the day on these pursuits and that brings down their productivity level drastically.

Not only do cellphones create constant distractions, but they often interrupt important meetings. They can also represent a security risk, mixing personal and business applications on one phone. They can prove physically dangerous to those employees who believe they can multitask while performing physical work. Sometimes they can spread confidential information in the public, which is a big concern in my business.

All in all, while your cell phone can be a useful tool in your life, best practices in the work place would be to turn it off and put it a drawer until after the work day is done.