It was just a week ago that the NASDAQ made a new, 15-year high. The other indexes also chalked up new trading records. Equity strategists were predicting greater gains just around the corner. Four days later we are at the bottom of the trading range again. 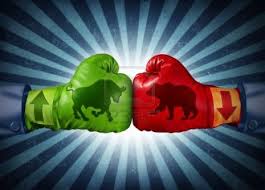 As I write this, the S&P 500 Index is up a grand total of 2.1% for the year. The other averages are not much better and who knows, by the end of the day we could easily erase some or all of those gains. The point is that we are still locked in a trading range that I believe could continue through most of the summer.

I guess the best I can say about the U.S. markets is that we continue to make new highs, rather than new lows. And now we are in the month of May. Readers might recall that this is the time of year when stock markets are expected to decline. Although this “Sell in May” phenomenon works more times than not, it is not foolproof. The last two years, for example, saw the markets higher during this month. For the six years prior to that, the market was evenly split: down three years in a row and up three years.

Thanks to the Fed’s history-breaking policies of low interest rates, high stock price policies of the last few years, most historical data is simply not useable. You might ask what has changed over the last week that could take the markets down so quickly.

Earnings results have been checkered with some big name tech stocks disappointing, but others have delivered upside surprises. The dollar has pulled back somewhat (down about 5% from its highs), and oil prices are higher at just below $60/BBL. for West Texas crude. But the biggest downer was the first quarter GDP data. Investors expected lackluster results but 0.02%growth was quite a bit lower than even the bears expected. Just four months ago, to put that number in perspective, economists were telling us the economy was growing at a 5% clip.

A polar winter in the Northeast, the strong dollar, a slumping energy sector and a consumer that was saving and paying down debt, rather than spending, seems to be the culprits. Within seconds of the GDP release, the bears were predicting the “coming recession.” Stock prices swooned. Naturally, the dollar declined, since traders questioned how the Fed could even contemplate raising rates this summer on the back of such a weak number.

And so we spent the week taking back all the hard-won gains of the previous week. Does anyone see a pattern here? You should, because it has been going on all year. The moral to this tale is for those anxious investors who check their accounts every day. Cease and desist, because this kind of action will drive you nuts. What’s worse, I expect it to continue for a few more months (although as the summer unfolds, at a slower pace).

As for the fate of the economy this year, I’ll stick with the Fed’s view that this weak number will prove “transitory.” Future data will show gathering strength as the year progresses, with further gains in the job market. I’m still looking for better action in the second half, so have patience.