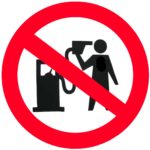 Over the last week a flurry of price forecasts for gasoline have reverberated through Wall Street. Some experts are guessing that pump prices could easily top $4.00/gallon and possibly higher by Memorial Day this year.

Their forecasts are being extrapolated from the present price of gasoline which averages $3.52 per gallon. That is high for this time of year, since February is usually a period of low gasoline demand. You might think that this year is a bit different since the mild winter and absence of snow throughout much of the country might bolster driving. But demand nationwide is down to 15-year lows.

What has propped up oil prices so far this year is continued instability worldwide. The financial crisis and subsequent recession in Europe, which should have reduced energy demand has been counterbalanced by events in the Middle East. The real culprit in the oil patch appears to be Iran.

The world wants Iran to cease and desist developing nuclear weapons or else. In response, Iran has been threatening to close a key oil avenue through the Strait of Hormuz, if the U.S. and the EU deliver on their intent to apply economic sanctions to their country. As a result, the price of oil has been flirting with $100/BBL level over the last few months and is presently trading above $102/BBL for West Texas crude. The threat of higher oil prices if Iran were to embargo Europe or the U.S. is real. Iran boasts the world’s fourth-largest proven oil reserves and the world’s second largest natural gas reserves.

Middle East tensions are nothing new. The oil market periodically moves up and down with unfolding events in that region. Spikes tend to be short-lived but everyone from the Fed on down pays attention to trends. What makes this situation a little different than usual is that the tensions are occurring just at the moment when the U.S. economy appears to be picking up some speed.

The last thing this country needs right now is for oil/gasoline prices to trend higher. I have written at length on how energy prices are another form of tax on American consumers. Although energy prices account for only 5% of our overall spending, it is spending that cannot easily be cut back. If the experts are right and gasoline prices move higher as a result of a stronger demand and the continuation of political tensions, then consumers might be paying a few hundred dollars more this summer for gasoline.

That is a lot of money when multiplied by the number of Americans driving cars, trucks, buses and motorcycles. If past behavior is any guide, consumers will fork over the extra money for gas but at the same time cut spending on other things like restaurants, vacations, and shopping at the mall. Higher energy prices will also take a bite out of profits in Corporate America. It will also mean higher prices from everything from diapers to tires as companies attempt to pass on the higher energy costs to consumers.

Unfortunately, higher energy prices are here to stay as long as this country fails to develop a comprehensive energy plan that will reduce our dependency on oil. Until then, we will remain hostage to every two-bit, oil-rich dictator or wanna-be nation that takes a swipe at us.