The fear of missing out (or FOMO) has supported the stock market averages this week. Although it appeared that the indexes simply marked time, appearances can be deceiving. 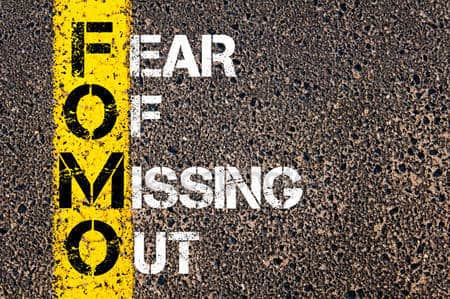 We made new record highs again this week as investors piled into stocks on any sign of weakness. The fear that stocks will go ever higher fueled those who are underweighted in equities to buy, buy buy. The S&P 500 Index has reached the lower end of my target (2,443) but could easily spike to 2,475, which is at the top of my range.

In bull markets, and this one certainly qualifies, I often observe traders attention move from concentrating on one set of sectors to focusing on another. Price usually dictates the move. Take the NASDAQ 100, for example, it is the large cap technology index. This index has hit record highs in 9 out of the last 11 sessions and has been higher 24 out of the last 30 market days.

Other areas, such as semiconductors and large cap growth stocks have also been ‘in favor’ and are now trading at nose-bleed levels. Yet, some sectors, such as small cap stocks and financials, have been lagging the market most of the year. As the price levels between the leaders and laggards widen, traders are now willing to buy those cheaper ‘out of favor’ sectors.

We call this “Sector Rotation” and this week, despite a relatively quiet market, traders were beginning to rotate into undervalued areas. If you are sharp and can afford to watch the markets day-in and day-out, you can detect these behavior patterns. There are still other areas, like commodities and basic resources stocks that are still in the doldrums. You can be assured that if the markets continue to run, their day will come.

Given that the entire world (according to the media anyway) was focused on the testimony of ex-FBI Director James Comey and what the president did or did not say, do, or feel in regards to the Russian Affair, most investors missed some important developments coming out of Washington.

The Department of Labor’s Fiduciary Rule becomes law today (see yesterday’s column for a complete rundown). The bottom line:  if you are receiving investment advice on your tax-deferred investment accounts from someone who is not a fiduciary, you better find someone who is. From now on, financial advice must be in the best interest of the client and not the advisor.

The trigger that saw financial stocks leap higher yesterday was the House’s vote to replace the Dodd-Frank Wall Street Reform Law that was passed as a result of the Financial Crisis in 2008. Investors know full well that the House version of this new “Financial Choice Act” won’t see the light of day in the Senate. Nonetheless, there is an expectation that the most onerous regulatory requirements of Dodd-Frank will be jettisoned, freeing up banks to make more profits and reduce their costs.

As for the rally in the Russell 2000 small cap index, the bull story is a bit more nebulous. The thinking is that, despite the media and the Democrat’s hope that Comey would provide some kind of “smoking gun,” he didn’t. That leaves the Trump Administration to re-focus their efforts on tax cuts, cutting regulations, etc. etc. All of the above would be good for the small business community and thus small cap stocks. My own opinion is that the opposition parties (the media and the Democrats) are hell-bent on keeping the Russian Affair alive to its bitter end.

The hope is that the Republicans and the Trump Administration will be so encumbered by this scandal that they will be unable to govern through 2018. That would pave the way for the Democrats to regain the Senate and/or the House. If you think this is a case of Washington gone wacky, just remember, it is exactly the same strategy Republicans used throughout the eight years of the Obama presidency. Unfortunately, the real victims in this tragedy are the American people.