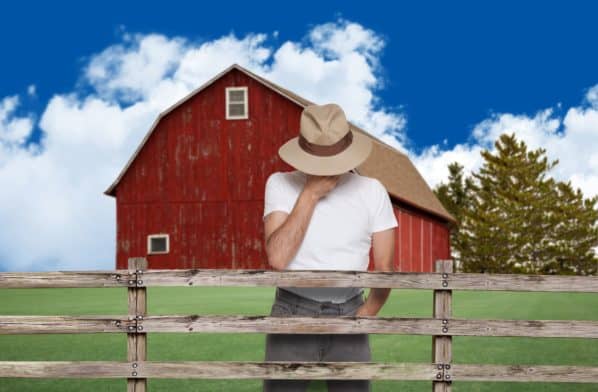 The very people who were supposed to benefit from making America great again have become victims of the man who promised them so much but has delivered so little.

While the Rust Belt states of Michigan, Wisconsin, Indiana, Illinois, Ohio and Pennsylvania teeter on the edge of recession, those in the agricultural sector (also Wisconsin, as well as Georgia, Nebraska and Kansas) are already facing an increasing number of bankruptcies. These are the swing states that carried Donald Trump to a win three years ago. They are now feeling the brunt of his trade, tariff, and wholesale rejection of climate change.

Farm bankruptcies through September of 2019 are up 24% versus last year. Suicide rates are rising among small farmers, and many towns that are dependent on the farming community are fast becoming ghost towns. Even Trump’s own Agricultural Secretary, Sonny Purdue, said that he wasn’t sure that the family dairy farm could survive in the future. At least he has the courage to tell the truth.

Americans, especially those who live in urban/suburban areas of the country, have this mythical myopia when it comes to the nation’s agricultural sector. Most think that the small family farm is what feeds us, and what surplus exist are sold overseas as exports. I am here to tell you that all of that claptrap no longer exists and hasn’t for decades.

Global competition, Federal government policy, and big business has changed the fabric of the farming sector.  Back in the 1970s, Federal farm policy sent an unmistakable message to the nation’s farmers to either get bigger or get out of agriculture. A decade later, we witnessed a quarter-million farm foreclosures. Overproduction, a grain embargo against the then-USSR, and high debt decimated the industry. Today, 80% of American farmland is owned by “Big Ag.”

In the last two years things have gotten immeasurably worse. Trump’s tariffs on China elicited a predictable response. Chinese tariffs were levied on U.S. agricultural imports like soybeans and corn. Since then, the Trump administration has given the industry $28 billion in financial assistance of which at least 80% of that is going to big conglomerates, not the small farmer.

At the same time, thanks to climate change, the last six years have produced increasingly unstable weather patterns resulting in floods, droughts and debilitating crop failures. The administration’s continued denial of these huge risks to our food production have been ignored. In fact, recent policies, in my opinion, have actually made our climate far worse.

Given the facts of farm production in this country and throughout the world, the small farmer of old is heading into extinction. In its place have risen boutique farms that are producing crops and food stuffs for a large population of consumers who buy direct and live close by. There are no or limited exports from these establishments.

A similar trend is occurring in the nation’s manufacturing sector. Countries such as Australia, China, South Korea, Argentina and Mexico produce steel, aluminum, cement and a host of other manufacturing products of the same quality (but at lower prices) than the U.S. can produce. This is not a new phenomenon, but Trump’s trade wars have made it infinitely worse for our manufacturing workers. And no one is talking about government assistance to this sector.

Tariffs may have prevented the manufacturing sector from total extinction, but they haven’t fixed what is wrong with the sector either, nor can they. It is the same story with farm subsidies. They won’t and can’t fix what is ailing the family farm. The tariff argument is an old one: we need these industries for our national defense in the event of war.  While that argument does carry weight, it does little to help our manufacturing and farming sectors, which continues to face global overproduction of just about every product they make.

As in farming, some would like to think that Trump’s policies will not only save but reverse the decline in manufacturing. That is as realistic as thinking of today’s workers as burly-armed men and women (as in WW II posters), when the reality is that today’s manufacturing workers are far more likely to be sitting behind a computer screen than toiling with sledge and hammer beside a belching furnace.

Sometimes, the cruelest thing one can do is give a person (or in this case, an industry) false hope. Trump, it appears, has done just that. Most people realize you can’t turn back the clock, no matter how hard you try. It is at the root of what Donald Trump promised and failed to deliver. The America he wants is an America that no longer exists, if it ever did. The America I live in is always changing, growing morphing into something new and different. Sure, it has its problems, and even the nature of these challenges’ changes over time, but by and large, I wouldn’t want to live anywhere else.  Would you?