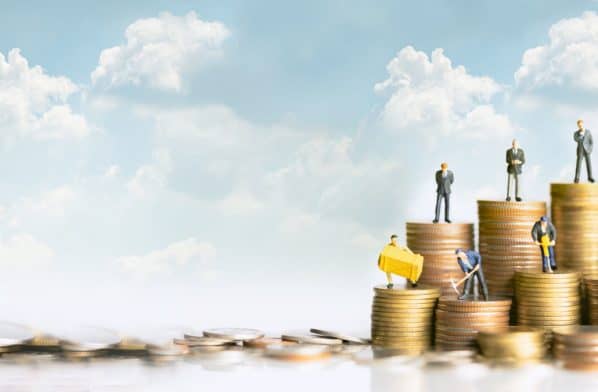 As Bernie Sanders takes the lead in the Democratic primary campaign, investors are beginning to take his socialist leanings to heart. But dire warnings from the opposition and Wall Street seem to have little impact. A look at the present income inequality in America goes a long way in explaining why.

Over the years, I have written a number of articles on the growing threat of income inequality and its damage to “the Great Center”–the American middle class.  According to a new study by the respected Pew Research organization, over the past 50 years, the highest earning 20% of U.S. households have garnered a steadily increasing share of America’s total income.

I have pointed out on numerous occasions that not only is our income inequality the highest of the G7 nations, but (depending on some studies), it is also the highest in the developed economies of the world.

If we talk about overall wealth, it should come as no surprise that the gap between America’s (richest 1%) and poor families has doubled from 1989 to 2016. And middle-class income earnings have grown, but at a much slower rate (49%) than upper income families (64%), according to the Pew Research study. Given this backdrop, is it any wonder that more and more young Americans worry that capitalism has failed them?

Before I get the usual amount of hate mail, let me be clear: not all Americans believe this. Take someone my age. I grew up in a time when Communism and Socialism were interchangeable. Both were abhorrent political and economic concepts. The USSR, parts of South America, Eastern Europe, and China had either rejected capitalism outright, or were experimenting with different degrees of centralized government control of the economy. We were at war. It was literally us against them. There was no room for compromise.

Therefore, no matter how hard we try, even the word “socialism” triggers old prejudices and fears. Younger folk, who were not around for the Cold War, only see what is happening today. They see the increasing disparity in income and wealth. They compare the universal health care systems around the world and wonder why the richest nation on earth can’t afford the same.

But it is not just the elderly that shy away from socialism. In the same Pew study, only 41% of Republicans and those who lean that way in their political views, think there is too much inequality in this country. That compares with 78% among liberals and Democrats.

However, over in liberal country the reverse is true. Those making the most income believe there is too much income inequality (93%), compared to lower-income Democrats (65%). Unfortunately, income inequality has been expanding in this country for the last thirty years under both Democrats and Republicans.

In my opinion, as more and more of the middle class slipped into the lower-income category, their stake in the institutions of this country (capitalism and our form of democracy) has weakened. I believe the election of Donald Trump was in response to this trend in income inequality.

His promise to “Make America Great Again” was exactly the lifeline the disappearing middle class was praying for. While it has made most Americans somewhat better off, it has done little to reverse the disparity between the haves and have-nots. This has emboldened some of Trump’s political rivals to demand and even more radical change in the economy and possibly the entire political system. It remains to be seen how voters will come down on this issue.