After touching new highs, once again the indexes retreated but, with the exception of the Dow, are still in the upper end of their trading ranges. Second quarter results are following the usual pattern of earnings “beats” but fewer investors seem willing to play that game and chase stocks. 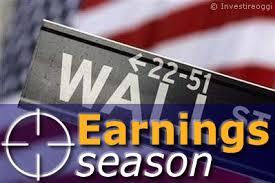 As I predicted three weeks ago, earnings are coming in better than expected but still not good enough to break the markets out of their year-long trading range. The earnings beat scam, where estimates are revised to such a low point, that companies can’t help but “beat” the estimates is so transparent that even the most naïve investors are discounting these headline numbers. Revenues and future guidance, however, are a different story.

While over 70% of companies that have reported have beat estimates only 50% or so have matched revenue estimates and future predictions at many companies have been mildly disappointing. Managements continue to blame the strong dollar and energy prices but this quarter some have added a new culprit—slowing growth in China, the world’s second largest economy. That slowing growth has also had an impact on the commodity space, which is taking a real drubbing.

Gold is now trading below $1,080 and looks poised to drop further to around $970/ounce. Other precious metals, basic materials and metals, coal, oil and various agricultural commodities have also plummeted. Driving these markets lower, are expectations that interest rates and the dollar will rise further as is slowing growth in China (the world’s largest user of commodities on the margin).

Some investors worry that the commodity rout is a sign that the entire global economy is rolling over and not just China. I disagree. The U.S. economy is gathering momentum. Europe and Japan are stimulating their economies (as is China) and their efforts are just beginning to bear fruit.

Here at home jobless claims (at 255,000) fell to their lowest level since 1973. Remember that this country’s economic growth is dependent on consumer spending. That spending is dependent on the number of Americans who have jobs. It is the primary metric that the Fed is using to determine when to hike rates. Next week we will get the government’s estimate of GDP growth in the second quarter. I’m looking for a stronger than expected gain.

The stock market, however, will not take this as good news. As evidence builds that the economy is growing and unemployment is falling, investors’ expectations of an eminent Fed hike in interest rates will increase. How will the investors react to that?

Pundits claim that the markets will take that first hike in stride. I’m not so sure. A rate hike, no matter how small, will most likely cause a knee-jerk downward reaction in the stock market in my opinion. Do I think you should be worried about that, not at all?

What it will do is simply keep the U.S. markets in check for the year. I could see a scenario where markets move higher as investors anticipate better company earnings over the next two quarters. Then the Fed hikes rates and the markets give back their gains once again. Would that be frustrating, yes, but not the end of the world by any means?

In the meantime, the Greek parliament passed yet another series of EU-recommended reforms (demands), which were a condition of granting the country a third rescue package. That is good news for those who are invested in European equities. I expect those markets to be choppy, but continue to gain, as some of these additional austerity measures cause unrest in Greece.

The Chinese market will remain volatile although it appears to have stabilized somewhat, thanks to a great deal of governmental support. While Wall Street is unhappy to see such heavy-handed meddling by the Chinese authorities, I am less concerned. Our own government, through the Treasury and the Federal Reserve, provided quite a bit of support to our own markets back in 2008-2009. The European Central Bank, as well as the authorities in Japan, are also guilty of meddling in their own markets. Why not the Chinese?

I’m still betting overseas markets outperform our own this year. By now, readers should have a reasonable amount of exposure to foreign stocks so sit and wait while the U.S. remains in a consolidation phase.