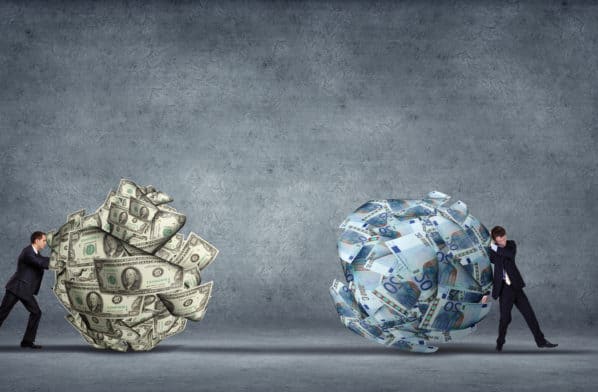 So far, third quarter earnings results have been all over the place. A mixed bag of beats, in-line numbers, and some big disappointments have kept the stock market treading water.

Companies such as Caterpillar, with large exposure to China, came in with lower than expected results. Boeing, another big Dow stock, also reported a 50% slide in earnings thanks to the problems generated by two crashes of their 737 Max aircraft. And yet, both stocks rallied on the news.

Semiconductor company, Texas Instruments, also issued poor earnings, sales, and guidance, but in this case, investors not only punished the stock but trashed the entire semiconductor sector along with it.  McDonalds, UPS, Lockheed, Amazon and Travelers Insurance, all mega-cap companies, also cratered on disappointing earnings.

To be sure, most of the disappointments were company-specific, so there is little one can glean about the health of the overall economy from the results. The majority of companies, however, are meeting or beating earnings expectations, which is what one should expect in a normal earnings season. Readers should know by now that analysts low-ball earnings estimates early, so that companies can beat Wall Street expectations when they report.

This earnings divide, thus far, does give some useful hints to those who are paying attention to the underlying price action. Most industrial stocks, for example, have sat out this year’s rally as recession and China trade war fears kept investors away from investing in this area. So why did Caterpillar (CAT) not fall after disappointing earnings this week?

I suspect that some investors are betting that we are at the bottom of the economic cycle. While many analysts believe overall earnings for this third quarter will be down an average of 3%, they also think that this might be the trough in earnings. Bulls are expecting fourth quarter, and next year’s earnings growth, to rebound.

If so, then cyclical companies like CAT could present real value. Remember that industrial stocks are economically sensitive. If one looks at past cycles, industrials were usually one of the best performing sectors coming out of a trough one year later.

The question to ask is whether this cycle will be similar to the last 11? That, of course, leads us right back to the trade wars and what the Fed may do on the interest rate horizon.

Do you bet on Trump caving in and rolling back all the tariffs he has levied thus far, or do you expect him to double down and implement the threatened tariffs he has scheduled for December? Given that most investors are worried about an economic slow-down brought on by an escalating trade war, those who are buying industrial stocks and other cyclical sectors are making a rather ballsy contrarian bet on the future health of the U.S. and global economies.

From an overall market perspective, some hesitation here (at less than 1 % from all-time highs) is understandable. It may have been too much to ask that third quarter earnings would be the catalyst we needed to break out and up to new highs. We also still have a week to go before exiting October, a notoriously volatile month for the markets.

But before you despair that stocks will ever breaking out of this two-year trading range, remember the Fed, which meets next week. If they perform in line with investor expectations and cut interest rates yet again, we just might get an excuse for that breakout.

For the Federal Reserve, slowing inflation may mean slashing job growth. Will we trade high inflation for high unemployment? Berkshire Money Management CEO and Founder Allen Harris explores how employment is impacted by interest rates, and why the...
Bundling up on Black Friday to shop for great deals on TVs, iPods, and holiday gifts while still full of Turkey and stuffing is a thing of the past. While our bellies have remained stuffed, our Black Fridays...
Your elderly dog has arthritis. His breathing is difficult. He needs assistance to get up, and his bladder is failing. The vet bills are far higher than your own, and it is getting more difficult to pay them....