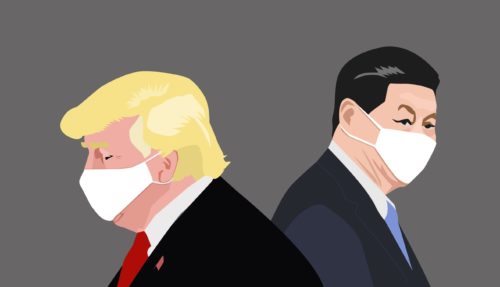 Despite the expectation that earnings this quarter and next were going to be a disappointment, stocks have been gaining. That is because results have not been as low as some analysts have projected. However, when is better than bad not good enough for investors?

It appears we have found out this week. It is a known fact that mega-cap, technology companies (the FANG stocks) have been leading the market throughout this rebound.  This week, several of these companies reported and while the results, in some cases, have been stellar, (given the overwhelming economic negatives in the economy), others were simply “acceptable.”

Two of the largest market darlings, Amazon and Apple, reported after the close on Thursday night. The verdict appears to have been disappointment, despite both companies accomplishing a mammoth task to produce the numbers they did.

But sometimes the market just needs an excuse to go up or down. I suspect that the FANG stocks are that excuse for traders to finally take some profits after an almost 20% uninterrupted series of gains. There could also be a couple of other factors that contributed to this week’s decline.

For instance, we know that stocks discount future events. The market began to climb while we were all in the throes of lockdowns, stay-in-place orders and death counts. That’s because the market was already looking beyond these events and discounting the future–the re-opening of the economy.  This week, more than 37 states announced plans to do just that. Good news, for sure, but news that the markets had already discounted, in my opinion.

What, you might ask, is the market discounting now? It could be the realization that this virus is not going away any time soon. The latest medical reports seem to indicate that COVID-19 could be with us for at least the next two years. If so, what impact will that have on the economy, on earnings, and on the labor force?

Those calculations, those “what-if” scenarios, are presently the grist of the stock market’s mill. Then there are the elections, now only 6 months away. The poor handling of the pandemic has dented Donald Trump’s chances for re-election. He knows that and so do the Democrats. With so little time, and the knowledge that a recessionary economy usually spells doom for the incumbent, Trump needs to go on the offensive.

Blaming others for mistakes has always been part of his repertoire. Americans, you see, love to cast blame on anyone and everyone, as long as it is not themselves. Trump learned how to use that knowledge to his benefit. Who could be Trump’s “go-to” whipping boy?

China. I expect to see a mounting crescendo of threats, accusations, and Chinese conspiracy theories erupt from the White House. After all, didn’t COVID-19 originate in China?  What other excuse does a campaign in trouble really need?

We all know how two years of China-bashing impacted world markets. Trump’s tweets sent markets up or down continuously. Economies slowed, tariffs were raised, and in the end, Trump bragged about a “Phase One” deal that was largely symbolic. By the way, that strategy did not work out too well for him in the mid-term elections.

Doing that again, combined with the real issue of an on-going pandemic, may be worth discounting now, or so the stock market seems to think. Last week, I said if the markets decided to head south, we could see a 5-10% correction. We have already logged in about 3% of that decline between Thursday and Friday’s sell-off. I do not think that we are going to re-test the lows, however, unless the re-opening of America backfires and COVID-19 cases re-escalate.

Whether you’re planning for retirement or selling your business, this Dalton firm is ready to optimize the experience so you get the most out of your assets, and your life DALTON — Allen Harris wants you to picture...
Dalton — Is it time to sell stocks because they’ve gone up so much? No. I don’t think so. Yes, we’re going to get a big correction. But, heck, we’re always going to get a big correction. Roughly three...
I’ve been advising readers to consider modifying business models, or starting new initiatives, to adapt to the new normal (whatever that is) and to find opportunity in a crisis.  Hopefully, you are excited to get started. But because...