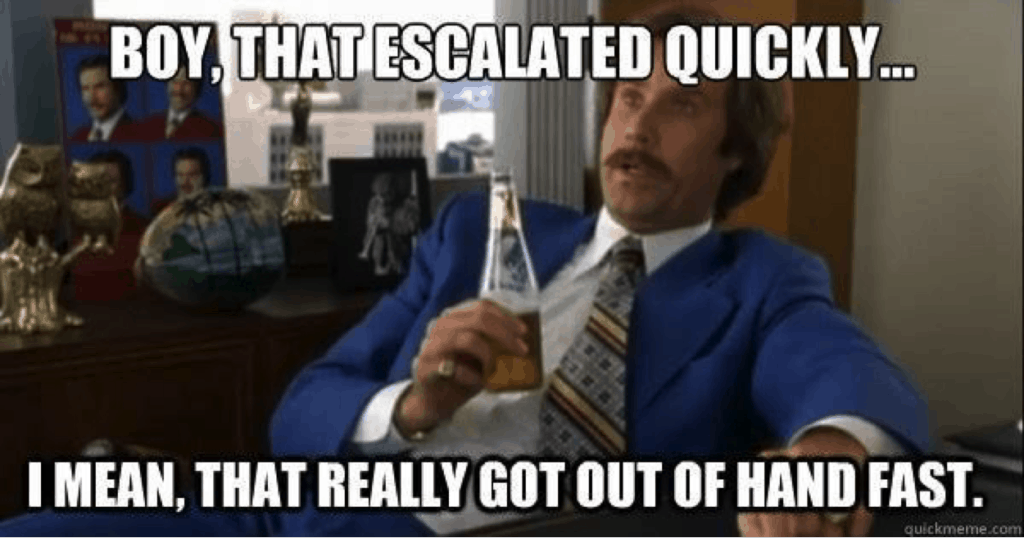 “Boy, that escalated quickly. I mean, that really got out of hand fast.”

Dalton — What in the actual $&#@ happened last week?! The Dow Jones Industrial Average and the S&P 500 dropped 12 percent and 11 percent respectively. Both indices suffered their fastest-ever corrections (a correction being defined as a decline of 10 percent). Last week was the worst for these indices since the financial crisis of 2008.

The media’s reason behind the sell-off was concerns about COVID-19, referred to as the coronavirus, and its impact on the global economy and corporate profits. Some companies, citing the coronavirus as the reason, issued warnings about their earnings forecasts. This weakened the market outlook as investors began to worry that the virus could become more widespread.

I don’t think that’s the best, or at least the sole, reason for the selloff. We humans like a narrative, a story we can relate to, because it helps us make sense of things, and that makes us feel more comfortable. The fact that the stock market was up about 19 percent over the previous four months, based on very little improving fundamentals, set us up for a tumble. On Jan. 29, I said that the market had melted up and that there would be a stock market correction. I expected a drop in the S&P 500 down to its 50-day moving average. However, instead, the index pierced its 50-day moving average, and then pierced its 200-day moving average. If I had expected a drop of that magnitude, I would have advised you to do more than rebalance your portfolio back to the allocation of your financial plan (everybody should have a financial plan) and consider adding Treasury Inflation Protected Securities (TIPS) into your portfolio.

I’m not one of those people who suggests that you should just sit back and relax as your retirement plan gets decimated. But it happened, so let’s talk about what to do now. First, let’s look at facts. People sell stocks not just based on math, but rather they sell stocks because the price of those stocks is going down (even if it’s potentially a better long-term investment at the lower price). Given the massive emphasis on the coronavirus currently, the stock cycle is going to track the news cycle. As things get worse with the coronavirus, the stock market remains vulnerable.

The good news is that if there isn’t a recession on the horizon, then the correction is probably close to its low. Since World War II, the S&P 500 has corrected 26 previous times. The average decline is 13.7 percent over four months (the S&P 500 had declined 15.8 percent from peak-to-trough for this correction) and has taken about four months to recover. The caveat is that this only applies to corrections — drops that exceed 10 percent — but do not breach bear market territory — drops exceeding 20 percent (bear markets are often associated with recessions). Once the stock market breaks the threshold of a 20 percent drop in prices, as it has 12 times since World War II, the average decline is 32.5 percent over 14.5 months and takes 24 months to recover. That’s a big difference, so we need to determine if this is a correction or if it’s the start of a new bear market, in which case we might be only halfway through the stock market’s fall.

While there had been some recent firming in some fundamentals, I’ve argued consistently that a U.S. recession in 2020 was substantially more likely than in most years and that we had to be aware of that. Because of an elevated risk of a recession, I’m not ready to say a bottom is in. I’m scared of something bigger. Last week, on Feb. 26, I wrote that, “I’d expect the coronavirus to cut U.S. 2020 GDP by a few percentage points, but not be the cause, by itself, to push the U.S. into a recession.” A cut in GDP by a few percentage points is pretty much zero growth — as close as you can possibly get to a recession. I also said that, “If you already took my Jan. 29 advice to properly rebalance your portfolio, I wouldn’t advise making any further changes just yet to your portfolio based on the coronavirus.” The rebalance was just Phase I in terms of getting more defensive. Considering TIPS was Phase II. Now we’re thinking about if there should be a Phase III in getting more defensive and, if so, what does Phase III look like?

I hate to give specific recommendations because I don’t know you or your financial plan. But for clients of Berkshire Money Management, prior to this sell off, our rebalancing did things like decrease exposure to small- and mid-cap stocks and shifted proceeds to ETFs (Exchange Traded Fund) with a heavier allocation toward REITs (Real Estate Investment Trust) and Utilities, as well as increased our exposure to “buffer” ETFs. Buffer ETFs have what are referred to as “defined outcomes,” which may leave a little money on the table if the stock market flies high but are designed to protect some of your capital if the market falls apart. It’s possible that Phase III may simply replicate that Phase I strategy — maybe. We still must determine the probabilities of whether the stock market is experiencing a correction, or if this will become a bear market, which means we may benefit from more short-term protection.

It wouldn’t be prudent to make a shift when the stock market is in free-fall mode; there is little that can intelligently be done until some firmer footing can be found. As I mentioned last week, China’s government is unleashing a good amount of economic stimulus, which may be helpful in finding that footing. Also, the Fed seems open to printing some more money. Last Friday afternoon it issued a statement saying: “The fundamentals of the U.S. economy remain strong. However, the coronavirus poses evolving risks to economic activity. The Federal Reserve is closely monitoring developments and their implications for the economic outlook. We will use our tools and act as appropriate to support the economy.”

What does firmer footing look like? Last week there were two 90 percent Downside Days (90 percent or more of volume is down, and 90 percent of all price action is down) and one 80 percent Downside Day. Panic selling such as this often persists until there is “panic buying.” Firmer ground would be defined by the market experiencing some Upside Days, and ideally we want that panic buying in the form of a 90 percent Upside Day (or, if we can’t get that, two consecutive 80% Upside Days), to give us a stronger confirmation that the recent market low was a selling climax and we can expect the market’s uptrend to resume.

Unfortunately, the Fed can’t print a vaccine, so we’re not relying on getting those big Upside Days. Instead, we’re preparing for Phase III, getting even more conservative in the face of what could become a recession.

“They’ve done studies, you know. Sixty percent of the time, it works every time.” –Brian Fantana

Let’s end on a positive note. There have been 14 other weeks in which the S&P 500 has had declines in excess of 10 percent. The average returns throughout the next year have been better than the average of all other instances — although beware that the probability of positive returns after the first week does not exceed 60 percent.

This 11-year bull market has been no stranger to pullbacks. For the S&P 500, there have been two 19 percent corrections: in 2011 and 2018. The index also dropped 16 percent in 2010, 14 percent in 2015-16, and 10 percent in each of 2012 and 2018. Other than the Christmas Eve Crash of 2018, most of you have probably forgotten about all those other ones. I won’t say “this too shall pass,” because it may get uglier. There is a good chance we’ve seen the worst of this. We’ll know more in a couple weeks as we see track trade volume and see if the coronavirus moves out of the news cycle.

The decline in stocks last week was seemingly largely a function of panic selling over what could possibly happen. Stock market panic over the coronavirus prompted the director-general of the World Health Organization, Tedros Adhanom Ghebreyesus, to call for calm in the public’s response. Ghebreyesus said: “Global markets … should calm down and try to see reality. We need to continue to be rational. Irrationality doesn’t help. We need to deal with the facts … Based on the facts on the ground, containment is possible.”

This doesn’t mean that the selling is over. Ghebreyesus also explained that “The window of opportunity is narrowing.” A number of my indicators suggest that returns from current levels could be pretty good, but fear is a very powerful motivator to sell stocks, so further declines in the near term cannot be ruled out, even if this doesn’t turn into a bear market.

This article originally appeared in The Berkshire Edge on March 04, 2020.