The worst of earnings season is behind us and it isn’t nearly as bad as investors feared. Led by the tech sector, market averages are once again near their highs and appear to be on their way to even higher highs. 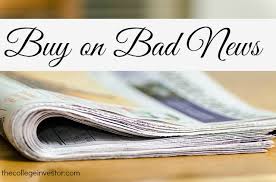 If you recall that last week at this time, world markets looked to be at death’s door and the recovery in five days has been encouraging. It is not only the U.S. market that has seen a strong recovery. The highly volatile Chinese market, after experiencing close to a 5% sell off in 2 days, rebounded nicely, erasing all losses and then some. The same can be said for Hong Kong and Japan. And now Taiwan is getting into the mix with more than a 3% gain in two days.

The S&P 500 Index tested its all-time intraday highs yesterday brushing 2,120, before falling back at the close. But it was NASDAQ that made history. The tech, biotech and social media index broke out of a 15-year trading range, blowing through its former high of 5,048 and ending the day at 5,056. That’s not bad, given that overall company results are mired in the worst earnings season in recent memory.

Remember, however, that these earnings announcements are a scam. At this point almost 80% of company earnings results have “beaten” Wall Street estimates, which have been revised down so many times that even the worst of the worst results appear to at least “match” analyst’s predictions.

Sifting through these results, what stands out to me are the consistent revenue misses that have been reported by so many multi-national companies. The strong dollar is to blame and company CEOs have said so. What’s even more unsettling is that most managers expect this trend to continue into the second quarter of the year.

It is one of the reasons why I believe that U.S. markets, while grinding higher, will remain somewhat lackluster (compared to some overseas markets) through the summer. And lackluster is a relative term. Readers should not forget that our markets are still hitting new highs despite uncertainty over the dollar, earnings and checkered economic data.

In a convoluted twist of psychology, the rising oil price has also been good for the stock market. In a classic case of what’s good for Wall Street is not good for Main Street, oil prices have been on a tear ever since they hit at low of $42/BBL. (my target was $40/BBL., close but no cigar). The rising price alleviates concerns that the oil patch and the banks that lend to them may be facing serious financial difficulties.

As for overseas markets, the Greek Tragedy plays on in theatres, although half the seats our empty. American investors seem to be ignoring the daily “he said, she said” war of words between European finance ministers. I expect that both sides will wait until the eleventh hour, which is still a month away, (when Greece’s money runs out of money again), before reaching an accommodation.

I said “accommodation” rather than solution because I am convinced that the EU will simply kick the can down the road once again. Until then, I expect European markets will continue to gain and lose (sometimes a percent or two a day) as the deadline draws near.

In the Far East, I am relieved to see that markets are consolidating a bit after a strong three days at the beginning of the week. That’s encouraging. I would prefer to see more of the same, rather than these roller coaster periods of huge gains followed by 4-5% corrections, especially in China and Hong Kong.

I expect the Japanese Nikkei, which recently broke out from strong resistance at the 20,000 level, will continue to climb. The fast track trade agreement between the U.S. and 12 Asian countries, including Japan, should provide impetus for further gains as will Prime Minister Abe’s historic appearance before both houses of congress this Wednesday. My advice is to keep the faith, stay invested and enjoy the ride.