Five of the six largest U.S. banks were downgraded on Thursday by credit agency Moody’s Investors Service. In Europe, Spain said its banks will need another $78 billion in new capital while the ECB is planning to relax rules for lending to other banks in Southern Europe. Is it any wonder banks aren’t willing to lend? 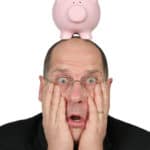 Altogether Moody’s downgraded a dozen of the world’s largest banks, those hardest hit had the largest exposure to capital markets activities. These are banks that take huge positions in stocks, bonds, derivatives and other securities. New rules implemented by Congress after the financial debacle of 2008-2009 was supposed to prevent our nation’s banks from ever-again becoming embroiled in risky securities that few understand.

However, just recently one of these down-graded banks was brought before Congress to explain their mega-billion dollar loss in just such a set of derivatives.  In other words, the risk that we could see a repeat of the financial melt-down is still with us. Moody’s downgrade is an acknowledgement of that fact.

This banking conundrum is why the economy is still stuck in second gear after three years of Fed stimulus. The Fed pumps trillions of dollars into the banking system, which lowers interest rates and encourages lending but the banks won’t do it. Yesterday I wrote in my column “Let’s Twist Again” that banks continue to ration credit to those who need it most, consumers and companies with less than perfect credit ratings.

Since lending has traditionally been the bread and butter business of the banking sector, these banks have to look elsewhere for ways to make money. So they speculate in the capital markets using all the cheap money the Fed provides them. Speculation carries its own risk but they would rather risk billions in the derivatives markets than trillions in lending to their customers. Go figure!

Markets did react not well to the banking downgrade or to their disappointment in the Fed’s extension of Operation Twist to the end of the year. They were looking for some grander gesture from the central bank. Both events gave investors the excuse they needed to take some profits after the hefty gains of the last two weeks.

In my opinion, this is just the kind of pullback I was hoping for when I advised readers last week to re-invest their cash. I had warned investors that the stock market could very well pull back to the 200 day moving average, which on the S&P 500 Index is at the 1,285 level. From here it is only 2-3% of downside while I believe the upside could easily be double or triple that.

Today in Rome leaders of the Euro-zone’s big four economies–Spain, France, Germany and Italy– are meeting to hammer out further solutions to their debt crisis.  These talks will set the stage for next week’s European Union summit in Brussels.   Investors have high hopes for some additional action by the EU and the ECB during that summit.

Time and again, however, investors have been disappointed by the results of these summits. I have warned investors that the market’s timetable and that of the EU is vastly different. Markets want solutions now but EU officials have a longer time frame. Changes among their members require negotiation, consensus-building and a bit of horse-trading. Many members, especially among the stronger economies, have traditionally taken a “wait and see” attitude to events. Over the past two years that has resulted in an atmosphere of crisis management.

Bottom line: look for more of the same in the coming week, which may give investors further opportunity to get back in the market at a reasonable price.