This week we witnessed the first substantial correction in the stock market of the year. What matters most to investors now is whether we are at the end of the decline or the beginning of something worse. 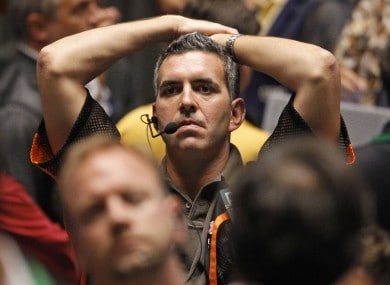 We’ve seen the lows, in my opinion, but that doesn’t mean we won’t retest them. Normally, I would expect to see at least one re-test of the lowest level made by the S&P 500 Index before all is said and done. If so, there could be risk of as much as a 5% decline over the very short-term for the markets. That doesn’t have to happen, but it may, so I want you to be prepared for the worse.

It was certainly a bad week to be out of the office visiting clients. However, being removed from the fray did give me a different perspective. What struck me immediately was how panicked investors became at a sell-off that was entirely normal in its depth and duration. At its worst, the S&P 500 was down a little over 12%. The next day it gained back almost 3% but that did not seem to matter.

I also noticed that volatility was higher than normal. That could be because many market participants in America and Europe were on vacation. The Dow dropped over 1,100 points on Monday morning before bouncing higher. That really spooked investors. What you may not know is that the Dow Jones Industrial Average has traded over 200 points (up or down) over the last six sessions. That has never happened before in the history of the stock market.

Finally, this correction has punctured several holes in Wall Street’s belief that our trading systems are the best in the world and head and shoulders above those of other countries. Not only were there any number of problems in trading both stocks and exchange-traded funds this week, but even the end of day pricing of securities became a problem.

Some of the so-called “circuit breakers” that were originally created to assist the flow of securities trading during times like these actually hindered the flow of trading at times. The lack of bids for securities should also put to bed the myth that high frequency trading somehow improves the depth and breadth of the markets. The opposite occurred this week as computers and the desk jockeys that guide them all fled the market at the same time.

As the smoke begins to clear, what I see is a market that may have more similarities to foreign stock markets (like Shanghai) than we care to admit. We Americans deride that market where two-thirds of investors are supposedly ignorant retail investors who trade in herds. That’s exactly what I witnessed this week in our own markets.

How were the panicky calls to ‘get me out at any cost” mentality of so many U.S. investors different from those by the Chinese? At least the Chinese markets appeared able to accommodate trading volumes far better than we could despite handling volumes that dwarf our own. You would think that more experienced, highly sophisticated investor types like us would understand that a 10% correction happens at least once a year in the stock market. Yet, I know several seasoned investors and money managers that were selling when they should have been buying.

As for the market, I expect the volatility will continue into September, although not at the rate of this week. You may have a chance to buy lower but that’s a short-term call that is simply too difficult to predict. What seems clear to me is that we now stand a good chance of moving higher by the end of the year. I expect the markets to recover all its losses plus another 4-6% on top of that. That’s not a bad return over the next four months.