That old saying, “a rising tide lifts all boats” certainly applies to the stock market this month.  It appears that more and more investors are abandoning the bond market and finally embracing equities. That spells further upside. 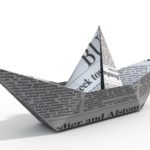 Last week U.S. investors moved a net $3.8 billion into equity mutual funds. The week before that $7.5 billion in new inflows were recorded along with over $10 billion invested in exchange traded funds. That’s the best two-week inflow into equity in 13 years.

Over the last few years I have kept tabs of the money flows in and out of the stock market. We have endured 22 consecutive months of outflows from the equity market. That money went into the bond market, CDs and checking accounts. Many of those investors did well by investing in U.S. Treasury and other bonds, since interest rates continued to fall while fixed income prices rose. They were convinced that equities were going to plummet at any moment.     It didn’t happen and now, thanks to the record low rates of return offered by these safe havens, investors may be embracing risk once again.

I have often said that as long as money was flowing out of the stock market, volatility would continue to increase while the probability of making new historical highs in the averages would be slim at best. The S&P 500 Index is up about 120% from the day I urged investors to re-enter the market back in March of 2009, and we are now within 5% of regaining the historical highs of 2007 in most of the averages

We need an expansion in volume and a wave of new buying in order to push us over the top. As I have said, a great many retail investors have sat on the sidelines through this four-year rally. It appears that they may now be moving out of their bond holdings and back into the stock market providing the fuel we need for further gains.

The contrarian in me worries, however, that if we do see the retail investor return to stocks, it may signal an approaching top to this four-year bull run. There have been times in the past, most notably the rush into technology stocks back in 2000, where the retail crowd has jumped in at the absolute worse time. I don’t believe that the retail investor is always wrong. There have been plenty of times that the common sense approach of the individual has trumped the hedge fund mentality of most professionals.

The market’s grind higher this week was that much more impressive given the earnings disaster of one Tech Company that, until recently, was the apple of most investors’ eyes. I recall warning readers last summer of the high, in fact, impossible valuation that the market was awarding this company.  Unfortunately, few readers took my advice to sell.

Stocks are over extended and could have a minor pullback at any moment, but overall I expect the markets will continue their winning streak through the end of the month and beyond. Underlying the averages, I have been seeing a lot of sector rotation where traders are selling the high flyers and buying the laggards. That is also happening overseas where emerging markets, for example, have been subject to profit-taking this month. I would use these pullbacks to add to positions.