By now you may have heard that Ringling Bros. and Barnum & Bailey Circus are set to close in May of this year. That’s the third circus in as many years to close their doors. You might say the announcement marks the end of an era stretching back for almost 150 years. I disagree. 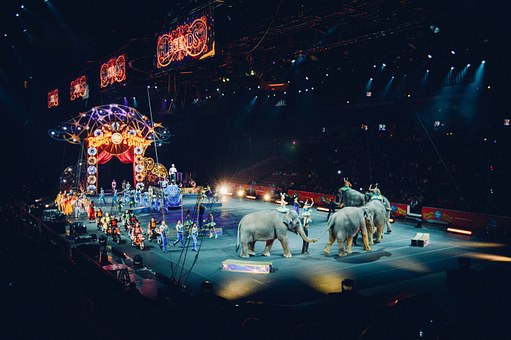 The circus will never die. It’s been around since the Romans were sticking each other with swords. It is a venue that is constantly changing that I believe will simply continue to evolve. Society has moved on from the need to see blood and guts on the sandy floor of the arena. For the last century and a half, we have been entertained instead by death-defying feats, acrobatics, wild animals and loud music. In today’s digital age, where kids (and adults) would rather sit at home and watch television or play internet games, the smell of peanuts and popcorn, intermingled with elephant feces and three rings of lion tamers, human cannonballs and clowns just doesn’t cut it.

Over the years, dwindling audiences, rising expenses, competition from other sources, the lack of marketing savvy by owners, and the increasing efforts by animal rights activists have contributed to the dwindling supply of old-time circuses that at one time crisscrossed the country.

The rising cost of attending the circus may have also been an issue. Middle-class families, whose numbers are also shrinking, had long been the bread-and-butter of the industry. In some cities, tickets for a Ringling show could be as high as $125. The cheapest seats, at $25, were still almost twice the price of a movie ticket. Plus everyone expects to buy food and at least one souvenir during a circus event. For a family of five, the costs have become insurmountable.

Despite rising ticket prices, circus costs were also increasing by leaps and bounds. Transportation costs, alone, have doubled over the last five years. The star-system tradition was also adding to the red ink. Year after year, those whose acts brought in the most tickets demanded to be paid accordingly. Billboard names such as Emmitt Kelly, the sad-faced clown, the Flying Wallendas and Gunter-Gabel-Williams, the fearless lion-tamer, took more and more of the profits.

Worst of all was the cost of the animals themselves. At Ringling Brothers, one elephant alone costs $65,000/year just to maintain. They had 40 of the big guys on the employee list. Add in the cost of other wild animals, plus the mounting law suits from animal activists, and you get the picture.

Some say the final straw of ‘greatest show on earth’ in this increasingly difficult business environment, was their decision last year to drop their elephants from the line-up. Attendance dropped even further as a result. Those who were asked said that without the elephants, a circus was just not the same. That may be true, but last year Cole, as well as the Big Apple Circus, both elephant-heavy big tops, also announced that they will be closing their tent flaps this year.

As the sun sets over the traditional animal-centric circus tent, a new group of modern-day acrobats, jugglers and dancers have taken the viewing public by storm. Led by Cirque du Soleil (the Cirque), a new industry has sprung up. Through marketing, research and innovation, these newcomers have captured the imagination and pocket-books of an audience that numbers 150 million people in over three hundred cities worldwide.

The Cirque realized through market research that what was important to circus goers were three things: the tent, the clowns and the acrobatic acts—not animals. So they got rid of the most expensive element, the animals, kept the clowns (but swapped their slapstick humor for something more sophisticated), and glamorized the tent. As for the acrobats, they dropped the star system, added artistic flairs they borrowed from Broadway, and included special effects from other travelling acts.

Since then, plenty of imitators have followed in their footsteps. As a result, the present day circus has evolved into something that is not quite an ordinary circus, but neither is it a classic theatre production. What it is though, is successful. In less than 20 years, the Cirque has achieved a level of sales that took Ringling Brothers a century to achieve. The point is that the circus will be around much longer than me or you but like everything in life, it will just be different.