Dalton — The price of balloons hasn’t gone up in 50 years, which is surprising considering inflation.

“Oh, and another reason the stock market isn’t poised for underperformance is because the Fed doesn’t care much about inflation right now. The Fed dropped the federal funds rate three times in 2019, to a range of 1.50-1.75%, and Fed Chair Jay Powell said in October 2019 he’d need to see a ‘really significant move up in inflation that’s persistent, before we would even consider raising rates to address inflation concerns.’ More recently, in the Fed’s minutes of their December 10-11, 2019 meeting, officials ‘warned about the macroeconomic consequences of not achieving 2% (inflation) on a sustained basis.’” [Emphasis added.]

Let’s think about what that means for the Fed, which has a dual mandate is to promote growth and fight inflation. The Fed’s preferred method of measuring inflation is the personal consumption expenditures price index, which is at 1.6%, compared to the Fed’s stated target rate of 2.0%. If the Fed is going to let inflation run a little hotter than normal, which I suspect it will be comfortable doing, that means it can focus on its growth mandate and can allow monetary policy to remain accommodative for longer. The market has been prodded higher by monetary stimulus, and the strong suggestion by the Fed to keep rates lower for longer has given the U.S. economy the potential to stave off a recession for all of 2020.

Further, Wednesday, Jan. 29, concluded a two-day monetary policy meeting by the Fed in which it stated that its policy is geared toward “inflation returning to the Committee’s symmetric 2 percent objective.” The “symmetric” terminology reaffirms that the Fed will allow inflation to run above that target. Specifically, Fed Chair J. Powell said: “we wanted to underscore our commitment to 2% not being a ceiling … we’re not satisfied with inflation running below 2%, particularly at a time such as now where we’re a long way into an expansion and a long way into a period of very low unemployment when in theory inflation should be moving up.”

The prospect of higher inflation makes an investment in Treasury Inflation-Protected Securities (or TIPS) more attractive. TIPS are treasury bonds that are indexed to inflation to protect investors from inflation eroding their purchasing power. The price of TIPS rises as inflation rises.

The Fed has set the bar relatively high when it comes to possibly raising rates again, and that, of course, makes bonds a bit more attractive than if the Fed were more prone to hike. It’s decided that letting inflation run hotter than it has been is a risk it’s currently willing to take. That makes TIPS an investment my company, Berkshire Money Management, is willing to make.

If you want to buy TIPS, you can do so through Treasury Direct. A quick legal disclaimer: Talk to your financial advisor, accountant, shrink, bartender and yoga instructor before buying these. But seriously, we bought these for some of our clients because we know our clients. I don’t know you, or your financial situation, or your goals. These investments happen to make a lot of sense for some people. Make sure they make sense for you before you even dip your investment toe into the TIPS pool.

I don’t mean to suggest TIPS are inappropriate like, say, buying Bitcoin is inappropriate. A lot of people buy Bitcoin, and other speculative things, just based on price movement, hoping that they can flip it to the next person. TIPS are intended for those who are a bit more conservative. Buying some conservative investments doesn’t mean that equity investments are inappropriate. After all, consider the following opening statement from Fed Chair J. Powell prior to the Fed’s Jan. 29 press conference:

“While low and stable inflation is certainly a good thing, inflation that runs persistently below our objective can lead longer-term inflation expectations to drift down, pulling actual inflation even lower. In turn, interest rates would be lower as well, closer to their effective lower bound. As a result, we would have less room to reduce interest rates to support the economy in a future downturn, to the detriment of American families and businesses. We have seen this dynamic play out in other economies around the world, and we’re determined to avoid it here in the United States.”

And what the heck does that mean? It means that the Fed is determined to avoid an economic downturn, which, in turn, supports stock prices more than they might otherwise be supported.

In last week’s column, I argued that the stock market would be going down soon. On Friday the Dow Jones Industrial Average was down almost 700 points. Why? Last week I wrote that, “whether it’s WWIII trending on Twitter or the coronavirus or because ‘Bad Boys for Life’ bombed at the box office, whatever is happening at the time the market goes down, the media will blame that.”

Well, people have quickly forgotten about Iran and the prospects of WWIII, and “Bad Boys for Life”had grossed $227 million worldwide even before the previous weekend started. However, the coronavirus has prominently been in the news, so that seems to be getting the blame for the market being down about 4% from its recent high until the White House declared the virus a public health emergency on Friday. Let’s say I’m wrong and any stock market pullback is really about what is happening in the news now, specifically the coronavirus. What does that mean for the stock market?

Historically, the stock market’s reaction to outbreaks of quickly spreading diseases has been short-lived. The April 2003 SARS outbreak has seen the most comparisons to the coronavirus. The fist SARS occurrence was in April 2003 and resulted in about 8,100 sicknesses and 774 deaths. The numbers change daily, but as of Feb. 3, there were more than 17,300 confirmed infections of the coronavirus and at least 362 deaths. I don’t feel as if the stock market comparison is fair between then and what could happen next because, in 2003, the stock market was rebounding from its depths, and more recently, the stock market has been overbought. Nonetheless, the S&P 500 was up 14.59% six months after SARS’ first April 2003 occurrence. 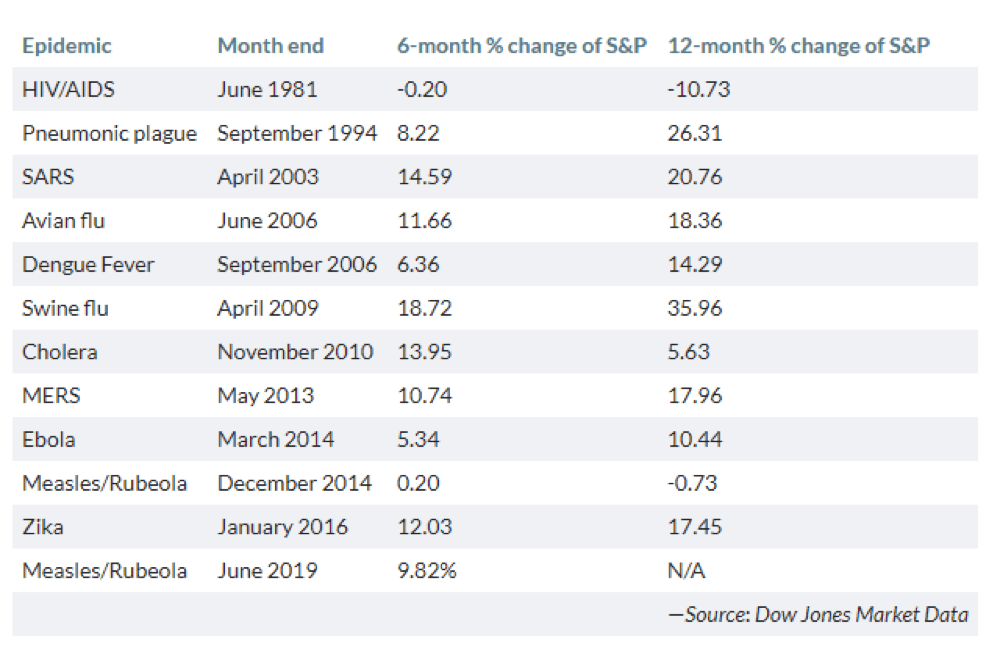 As you can see in the chart above, the S&P 500 has generally held up well in the face of previous fast-spreading diseases.

For the next 10 months, I’m going to talk politics and money — not in every column, but more than I might otherwise. How can I not? The 2020 presidential election is going to mean a lot to your investment portfolio. But today, let’s go light on the words and heavier on the pictures.

The Spectrem Group surveyed Democratic, Republican and Independent investors about their opinions regarding the impact of the election on the stock market. Sentiment matters, because if you feel a certain way, you’re likely to act a certain way. If you think things will be good (or bad), then things can become good (or bad) based on a self-fulfilling prophecy. The short of it is that investors expect that the Dow Jones Industrial Average will end 2020 at much lower levels if a Democrat takes the White House. The Dow had recently popped above 29,000 points, but many investors believe that if Trump is not reelected, the Dow will drop below 23,000 — a 20% drop from its high — by year’s end. 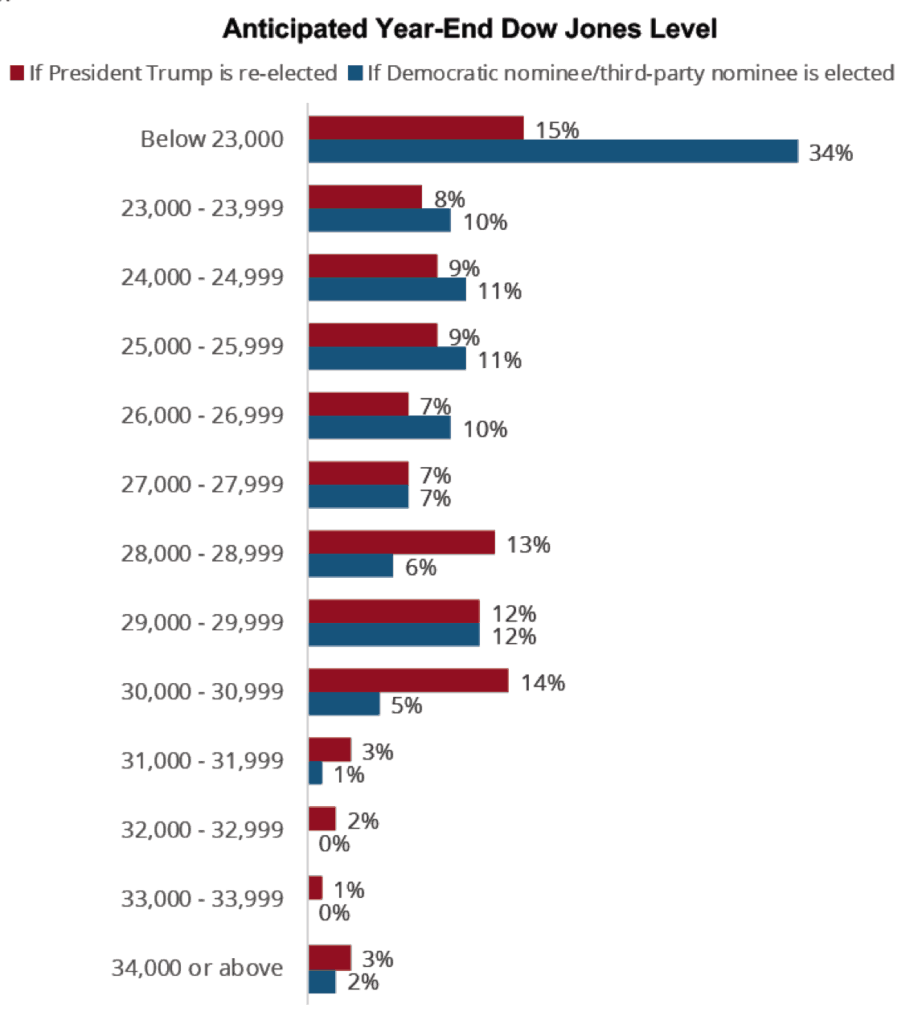 It’s been true for as far back as I can remember that views on the economy are extremely bipartisan. It’s quite interesting – obviously all the facts are the same, but generally, a Republican will think things are bad and going in the wrong direction if Democrats are running things, and vice versa. However, according to the Spectrem Group, “even Independents and Democrats believe the economy will at least remain the same if President Trump is re-elected,” and that “the largest percentage of investors believe that President Trump’s re-election will be positive for the economy.” Whether or not investors support President Trump, 42% feel his reelection would be good for the economy.

Like I said, sentiment can become a self-fulfilling prophecy because it drives actions. So, what will investors do? There is some balance between doing a lot and doing nothing. 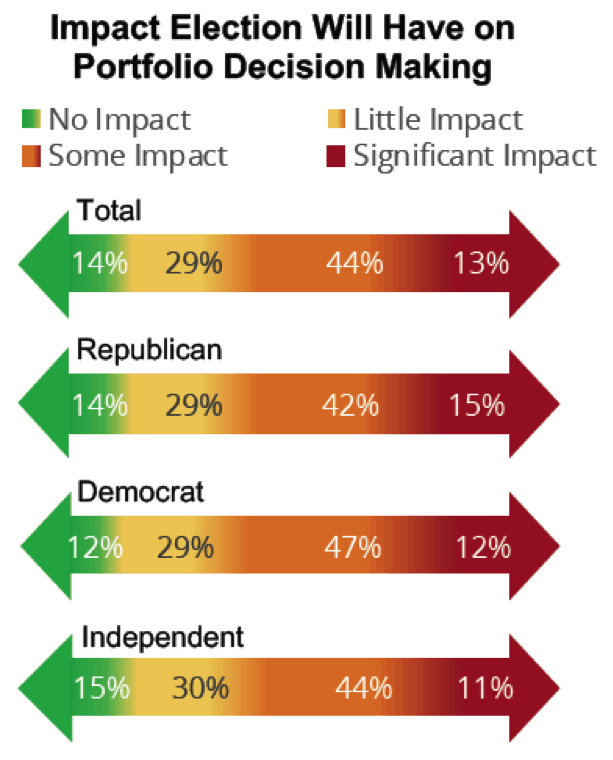 How do you protect yourself against such an extreme outcome? Last week I advised to rebalance your portfolio because: “there are most likely some riskier stocks or funds that have accelerated in price to the point where you own more of it than you should. Address this by selling those and reallocating the proceeds to the parts that have proven to be more stable. This will allow you to manage some of that downside volatility without taking you out of the long-term game.” And, maybe after you sell off some of those risker things that are now overweight in your portfolio, you, with the consultation of your financial advisor, consider taking some of those proceeds and put them in TIPS.

In closing, this isn’t “good-bye,” it’s just “see you later.” I will be escaping the cold weather and taking a trip to a tropical island so there will be no Capital Ideas column on either Feb. 12 or 19. I look forward to catching up with all of you when I return. Aloha.

This article originally appeared in The Berkshire Edge on February 5, 2020.